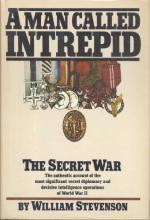 This detailed literature summary also contains Topics for Discussion and a Free Quiz on A Man Called Intrepid: The Secret War by William Stephenson.

A Man Called Intrepid, by William Stevenson, is the fascinating story of William Stephenson and his British Intelligence that functioned out of New York during World War II. Stephenson was code named Intrepid as was his operation, the British Security Coordination, which remained based in New York until September 1945.

Stephenson had served in World War I and become interested in electronics and communications. He was one of the first to form public broadcasting companies like the British Broadcasting Company (BBC). By the time of World War II, he had extensive business holdings around the world. He watched the situation in Nazi Germany develop and watched their gains in science and technology. He and others were appalled at Chamberlain's policy of appeasement— he could see the need for information and a source to interpret, analyze and coordinate that information. Businessmen, like himself, who traveled and has business dealings with the Germans were the source of information at the time. Stephenson's London office became the center for intelligence.

When Churchill became Prime Minister, he appointed Stephenson the head of His Majesty's Secret Intelligence Service. This became known as the BSC or the British Security Coordination. It had no official name at the time. Since they knew that England faced invasion from Hitler at some point in the future, Stephenson established his headquarters in New York, with Stephenson posing as a Passport Control Officer.

Before this, Stephenson was aware of the Germans' development of the Enigma coding machine. They improved it and used it in all Axis communication throughout the war and in the pre-war period. One of the biggest intelligence coups of the war was the smuggling of an Enigma machine out of Poland. The machine was placed at Bletchley, the site of the British code breaking operations. The material that came from this operation was coded as ULTRA and the British went to all lengths to protect the fact that they had an Enigma machine and were intercepting and decoding Axis communications all through the war. By the end of the war, Stephenson had developed a computer called COLOSSUS, to aid in the work.

This fascinating book tells this whole story as well as the various operations and tactics employed. They eventually established a training camp and base on a farm in Canada near Oshawa where they practiced for special operations, such as the assassination of Heydrich. The book gives a good look at how the decisions were made, many of which cost thousands of lives, as the British had to protect the source of their information.

This book is well worth the reader's time. The reader will learn the intriguing story of the intelligence work that took place in the World War II years. The book is easy reading and very interesting.