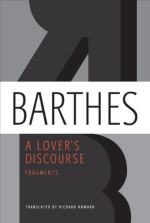 Roland Barthes
This Study Guide consists of approximately 28 pages of chapter summaries, quotes, character analysis, themes, and more - everything you need to sharpen your knowledge of A Lover's Discourse.

Roland Barthes was born in France and makes several references to Paris in categories within the book.

The book, A Lover's Discourse was so popular in Europe that the book was translated and distributed in the US.

The book by Goethe "The Sorrow of Young Werther" is the often most quoted resource in Barthes' book. Goethe's book was so popular in Europe at its time of publication in the 18th Century that men would dress like Werther.

Barthes makes a number of references in the margin to etymology in support of various arguments. One definition of etymology is "the derivation of a word."

Barthes references an 1199 young monk who travels to an abbey in Brabant in order to obtain the gift of tears.