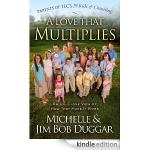 A Love That Multiplies: An Up-Close View of How They Make It Work Summary & Study Guide

Michelle Duggar
This Study Guide consists of approximately 27 pages of chapter summaries, quotes, character analysis, themes, and more - everything you need to sharpen your knowledge of A Love That Multiplies.

A Love That Multiplies: An Up-Close View of How They Make It Work Summary & Study Guide Description

A Love That Multiplies: An Up-Close View of How They Make It Work Summary & Study Guide includes comprehensive information and analysis to help you understand the book. This study guide contains the following sections:

This detailed literature summary also contains Topics for Discussion and a Free Quiz on A Love That Multiplies: An Up-Close View of How They Make It Work by Michelle Duggar.

Jim Bob and Michelle Duggar were parents of nineteen children at the time they wrote the book. The children were all biologically their own and there were two sets of twins. Michelle had been using a contraceptive when she became pregnant with the couple's second child. The pregnancy ended in a miscarriage and the Duggars dedicated themselves to accepting as many children as God saw fit to give them. Their youngest child, Josie, was born several months premature and weighed in at less than one pound. Michelle was seriously ill, which led to Josie's premature birth. Michelle's illness and Josie's difficulties early in her life led the family to do what they had always done - pray and put their faith in God. After Josie was out of danger, Jim Bob and Michelle said the situation had led them to a new level of faith.

Jim Bob and Michelle had definite ideas on the topic of parenting although they said that they were constantly learning and denied that they were experts. The Duggars homeschooled the children, using computer software for some classes for the older children. Those who had already graduated helped monitor the progress of the younger children.

All children were assigned tasks with the difficulty of the job dependent on the age group. The youngest were taught to play quietly while the older children were studying. Some of the older girls loved to cook and took over that task for many of the family's meals. Children were paired so that an older child and younger child were together for trips and other daily events. The Duggars traveled often, making trips fit into the homeschool programs when possible. Each child studied an instrument and the family often performed in public. Ministry was a major part of their lives and they traveled to El Salvador several times on mission trips.

Each night, the entire family gathered to read a Bible passage and to discuss the events of the previous day and the plans for the coming day. Often, Jim Bob sought to catch the children's interest by teasing them about what he had planned for the next day.

The Duggar's oldest child, Josh, had married. He and his wife Anna had one daughter with a second on the way at the time Jim Bob and Michelle wrote the book. The Duggars said their children did not date in the typical sense of the word. They were encouraged to avoid physical relationships in favor of enhancing their relationships with God and preparing themselves for the mate God had in mind for them. As the book came to a close, the Duggars said they were open to another child, if God chose that for them.

More summaries and resources for teaching or studying A Love That Multiplies: An Up-Close View of How They Make It Work.

A Love That Multiplies: An Up-Close View of How They Make It Work from BookRags. (c)2022 BookRags, Inc. All rights reserved.