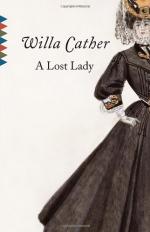 After his stroke, Mr. Forrester drags his left foot and has trouble with his speech. The doctor, however, says that unless the man were to have another stroke, he still had several years of life ahead of him.

Niel leaves in August to begin studying for architecture school in Boston. Niel worries that Mary, Mrs. Forrester's housekeeper, will be getting married in the fall and the couple will not be hiring another housekeeper. Although Niel can't stay for supper, Mr. Forrester pours sherry and gives him his famous toast of "Happy Days."

As Niel leaves the house and heads down the hill, he wishes that he could ask Mrs. Forrester what she does with her elegance and high birth when she is with a man like Frank Ellinger.

This chapter of the...

(read more from the Part One, Chapter Nine Summary)