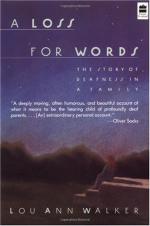 A Loss for Words: The Story of Deafness in a Family Summary & Study Guide

Lou Ann Walker
This Study Guide consists of approximately 26 pages of chapter summaries, quotes, character analysis, themes, and more - everything you need to sharpen your knowledge of A Loss for Words.

A Loss for Words: The Story of Deafness in a Family Summary & Study Guide Description

A Loss for Words: The Story of Deafness in a Family Summary & Study Guide includes comprehensive information and analysis to help you understand the book. This study guide contains the following sections:

This detailed literature summary also contains Topics for Discussion and a Free Quiz on A Loss for Words: The Story of Deafness in a Family by Lou Ann Walker.

A Loss for Words is Lou Ann Walker's autobiographical account of growing up with deaf parents. She describes generally happy early years, followed by a crisis of identity and emotional turmoil in her twenties, and Walker finally ends in a spirit of reconciliation and understanding.

Gale Walker, Lou Ann's father, becomes deaf at three months after a fever, and Doris Jean, Lou Ann's mother, becomes deaf after a bout with spinal meningitis in infancy. There is a lot of guilt and misunderstanding in both families about the deafness. At young ages, both parents are shipped off to the Indiana School for the Deaf. The school practices an "oralist" tradition of deaf education, in which vocalization and lipreading is encouraged and sign language discouraged, but the children learn sign language despite this challenge.

Gale and Doris Jean meet in 1950 after being set up on a date by friends. It is love at first sight, and soon Gale proposes at the Indianapolis 500 race. Gale works as a linotype operator at a local newspaper. Gale and Doris Jean settle down in Montpelier, Indiana, where there is extended family. In 1952 Lou Ann is born, followed by two other girls.

Being the eldest, Lou Ann finds herself being a go-between and intermediary between her deaf parents and the hearing world. She interprets, makes phone calls, negotiates with the mechanic, handles financial transactions, proofreads letters, and many other things. She deals with prejudice and unkindness because of the common stigma associated with deafness.

Lou Ann attends Ball State to become a teacher in deaf education, and eventually transfers to Harvard for comparative literature. She works for a magazine after graduation, and to earn extra money she becomes registered as a deaf interpreter, assisting the deaf in everything from court trials to medical matters. In this interpretation work she sees injustice and bigotry against the deaf.

During one interpreting session for a mental patient, Lou Ann has what could be described as a nervous breakdown. She realizes that she has been a pushover her whole life, an interpreter, a crutch for her parents, and she has given and given but has never taken care of herself or discovered her own personality. She quits interpreting and suffers through a period in which all her repressed childhood anger bubbles forth. Eventually, after visiting her parents, grieving in her grandfather's funeral, and enjoying her sister's marriage ceremony, she comes to a fuller and deeper understanding of herself and her parents, arriving at a sort of peace by the book's end.

More summaries and resources for teaching or studying A Loss for Words: The Story of Deafness in a Family.

A Loss for Words: The Story of Deafness in a Family from BookRags. (c)2022 BookRags, Inc. All rights reserved.