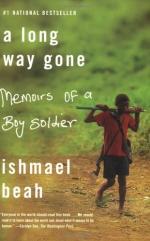 Ishmael Beah
This Study Guide consists of approximately 20 pages of chapter summaries, quotes, character analysis, themes, and more - everything you need to sharpen your knowledge of A Long Way Gone.

A Long Way Gone: Memoirs of a Boy Soldier Summary & Study Guide includes comprehensive information and analysis to help you understand the book. This study guide contains the following sections:

This detailed literature summary also contains Topics for Discussion and a Free Quiz on A Long Way Gone: Memoirs of a Boy Soldier by Ishmael Beah.

A Long Way Gone: Memoirs of a Boy Soldier by Ishmalel Beah tells the story of a young boy whose life was invaded by the rebel army. He became a boy soldier who eventually became repatriated, becoming a spokesperson for children in Sierra Leone.

Young Ishmael wasn't worried about war, even though he had seen refugees traipse through his village for several years. Instead, he was focused on dancing to Hip-hop with his group of friends and his brother, Junior in Mattru Jong, 16 miles from his home village.

While he was there, his home village was attacked, and his family disappeared. He and his friends were on their own, scrounging for food and scrambling for safety. They turned on each other as they fought for food.

The boys realized how precarious their situation was when they were caught by rebels and separated into two groups. Ishmael had a gun to his head before he was saved by a sound in the woods. He ran off with his friends, trying to survive. They discovered that no-one wanted to help them since trust was a rare commodity in war-time and someone had started a rumor about a group of boys who caused harm.

Ishmael and his friends were captured and interrogated, but they were let loose after Ishmael's music cassette was found, showing that he wasn't a threat. He was just a normal boy.

They discovered that some relatives were in a village 30 miles away so they set off to find the relatives after the village in which they were staying was burned to the ground. The boys traveled on and ended up on the shore of the Atlantic Ocean. It was beautiful, and they enjoyed their time on the beach until they came across a village. Instead of finding help, they were captured, interrogated, and their shoes were taken away before they were forced to leave.

It was so hot the skin burned off their feet. A man in a fisher's hut helped them until the villagers discovered their whereabouts. Once again, the cassette came to the rescue, showing that they were a group of innocent boys.

Ishmael and the boys continued traveling. They learned that Ishmael's family was in a village that was a two-days walk away. Right outside the village a man Ishmael recognized asked the boys to help him bring bananas to the village. While they were doing this, the village was attacked, and everyone was killed so Ishmael never got to see his family again.

Several days later, he and his friends were held at gunpoint. They joined a village comprised of over 30 orphaned boys. In this village, they learned how to fight the rebels and stay alive. They were taught to shoot and to hide. The boys were given drugs that gave them energy and helped them desensitize and become vicious.

When Ishmael was 16, he was told to get into a vehicle that took him into the city. He was thrown together with other child soldiers for rehabilitation. He had to learn how to live without drugs and embrace his childhood again while battling his nightmares. He overcame the hardship and became a spokesperson for the children in Sierra Leone for the rehabilitation center and at the United Nations.

More summaries and resources for teaching or studying A Long Way Gone: Memoirs of a Boy Soldier.