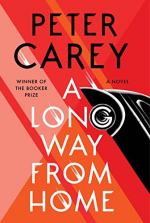 A Long Way From Home: A Novel Summary & Study Guide

A Long Way From Home: A Novel Summary & Study Guide includes comprehensive information and analysis to help you understand the book. This study guide contains the following sections:

This detailed literature summary also contains Quotes and a Free Quiz on A Long Way From Home: A Novel by Peter Carey.

The following version of this book was used to create this study guide: Carey, Peter. A Long Way from Home. New York: Alfred A. Knopf, 2018.

The novel opens in 1953 in the suburban Australian town of Bacchus Marsh. Married couple Titch and Irene Bobs have recently moved to Bacchus Marsh. They are both car enthusiasts, and Titch is a used car salesman. Their goal is to open a Ford franchise dealership in Bacchus Marsh. Unfortunately, Titch’s cruel and domineering father Dan is also a car dealer, and to spite them, he relocates his Ford dealership to Bacchus Marsh so that they cannot open their own. Titch and Irene consider opening a franchise dealership of another car brand. They also decide to participate in the Redex Trial—an arduous, long-distance car race—in order to gain free publicity for their business.

For the race, Irene and Titch recruit their neighbor, Willie Bachhuber, to be their navigator. Bachhuber is highly intelligent and makes a living as a recurring contestant on a quiz show. Bachhuber is technically married, but he left his wife after she gave birth to a child of visibly Aboriginal descent, leading Bachhuber to believe that she had an affair. Irene, Titch, and Bachhuber go to the city of Sydney for the start of the race. Bachhuber’s planning and navigation give them a big advantage in the race. However Titch’s father entered the race as well to try to sabotage them. At one point, Dan accidentally crashes and dies. Titch, stricken with grief, drops out of the race.

Meanwhile, at the Aboriginal settlement, Bachhuber takes on the role of schoolteacher for the children there. He teaches them various academic subjects, such as history. The history lessons largely focus on the oppression historically faced by Aboriginal Australians at the hands of white Australians. In Bacchus Marsh, Irene receives a visit from Bachhuber’s wife and his son, Neil, who is in fact Bachhuber’s biological son. Neil expresses interest in meeting his father. However, Bachhuber is arrested and receives a lengthy prison sentence after he engages in a violent altercation at the settlement. Titch and Irene begin to repair their relationship, and Neil grows up to be a successful doctor.

A Long Way From Home: A Novel from BookRags. (c)2022 BookRags, Inc. All rights reserved.