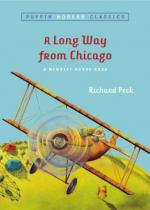 Richard Peck
This Study Guide consists of approximately 30 pages of chapter summaries, quotes, character analysis, themes, and more - everything you need to sharpen your knowledge of A Long Way from Chicago.

It is now 1942 and Joey and Mary Alice are grown. World War II has started. Joey realizes the war is his opportunity to realize his dream of flying, so when he is able, he joins up. He has to do basic training at Camp Leonard Wood and realizes that the troop train taking him there will pass through Grandma’s town sometime during the night. He sends Grandma a telegram to alert her since she never has acquired a phone.

When they reach Grandma’s town, the train slows past the depot. Joey looks out when they pass Grandma’s house. Every light is on and he sees Grandma standing in the door. She doesn’t know which car he is in, but she waves hoping Joey will see. He waves back, long after the window fills with darkness and distance.

More summaries and resources for teaching or studying A Long Way from Chicago.

A Long Way from Chicago from BookRags. (c)2021 BookRags, Inc. All rights reserved.