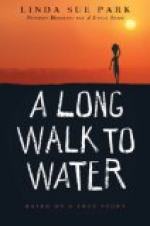 A Long Walk to Water: Based on a True Story Summary & Study Guide

Linda Sue Park
This Study Guide consists of approximately 39 pages of chapter summaries, quotes, character analysis, themes, and more - everything you need to sharpen your knowledge of A Long Walk to Water: Based on a True Story.

A Long Walk to Water: Based on a True Story Summary & Study Guide Description

A Long Walk to Water: Based on a True Story Summary & Study Guide includes comprehensive information and analysis to help you understand the book. This study guide contains the following sections:

This detailed literature summary also contains Topics for Discussion on A Long Walk to Water: Based on a True Story by Linda Sue Park.

"A Long Walk to Water" is a novel by Linda Sue Park. Published in 2010, the novel is written for older children and young adults and tells two separate stories which are brought together in the final chapter. The first story is about Nya, an eleven-year-old girl living in Southern Sudan who must make two long walks to fetch water for her family each day. The second - and main - story is based on the true life experiences of Salva Dut, who is forced to flee the war in Southern Sudan when he is eleven years old, and spends many years as a refugee before returning to Southern Sudan to drill wells which bring water to remote villages.

2008 - 2009. Nya is an eleven-year-old girl who lives with her family in a small village in Southern Sudan. For seven months out of the year Nya must make two long walks every day to a pond near her village to fetch water for her family. During the dry season, Nya and her family move to a camp by a lake where Nya must dig in the clay of the lakebed with her hands and wait for hours to gather the small amount of filthy water that trickles in. One day after Nya and her family have returned to their village from the lake camp, two strangers arrive and meet with Nya's uncle, the village chief. Soon they return with a crew of men, and begin drilling a well. Although Nya is skeptical at first, water eventually gushes from the hole they have drilled. Nya's father tells her that he and the other village men will build a school and, since she no longer has to make her two long walks to fetch water each day, she will be able to go to school and learn how to read and write.

1985 - 2007. Eleven-year-old Salva Dut is in school one day when gunfire erupts outside. There has been fighting in Southern Sudan between the government troops and the rebels for two years, but this is the closest it has ever come to Salva's village. When the gunfire stops, the teacher tells Salva and the other boys to run into the bush and not return to their villages, because it will not be safe. Salva runs into the bush, away from his home and family, and soon joins a group of other people who are all fleeing the fighting. The group spends their second night in an old barn, and when he wakes up in the morning Salva finds that he has been left behind because he is a child and will slow the group down.

Salva stays with an old woman he calls Auntie for a while until one day Auntie tells Salva that she must leave and that it will not be safe for her to travel with him. Just before Auntie leaves another small group comes by her house, and she arranges for Salva to travel with them. Other people start to join this new group, and a few weeks later Salva is overjoyed when his Uncle Jewiir joins the group. Jewiir has been in the army and soon becomes the group's leader. Jewiir decides to take the group to a refugee camp in Ethiopia, but to get there they must cross the Nile River and the Akobo Desert. While walking through the desert Salva starts to lose hope and begins to fall behind, but Jewiir keeps him moving by telling him to only walk to that clump of bushes, and then only walk to that rock, and so on. By teaching him to set small goals and persevere, Jewiir helps Salva get through the desert. Just before they reach Ethiopia, Jewiir is killed by looters and Salva is again alone.

Salva spends the next six years in the Itang refugee camp in Ethiopia, until one day dozens of soldiers come and force the people living in the camp into the Gilo River. Over a thousand people are killed, but Salva manages to swim across the river back into Southern Sudan. Soon Salva finds that he is the leader of over 1,200 other boys who have also survived being driven into the river and for the next year and a half he uses the lessons he learned from Jewiir in the desert and leads the boys across Southern Sudan to safety in Kenya. Salva spends the next five years in refugee camps in Kenya. One day when he is 22 years old, Salva is told that he has been chosen to be one of 3,000 "Lost Boys" who will be relocated to the United States. Several months later, Salva flies from Kenya to Rochester, New York to start his new life with his new family.

Over the next six years Salva adjusts to his new life, and eventually goes to college. One day Salva gets an email telling him that his father is in a clinic in a remote section of Southern Sudan. With the help of his new family, Salva spends months making travel arrangements, and finally travels to the clinic where he is reunited with his father after almost 19 years. He learns that much of his family is still alive, but that it would not be safe for him to visit them. Before they part, Salva's father blesses him by sprinkling water on his head. During his flight back to Rochester, Salva has an idea of how he might be able to help the people of Southern Sudan by drilling wells and bringing water to remote villages. During the next few years Salva makes this idea the focus of his life, and is eventually able to make his dream a reality.

2009. When the well in her village is finally completed, Nya waits her turn in line and fills her plastic container with cold, clean water. She sees the man who first came to her village and talked with her uncle, and who then acted as the boss of the drilling crew. When she goes over to thank the man for bringing water to her village, he asks her name and after she tells him it is Nya, he tells her that his name is Salva.

More summaries and resources for teaching or studying A Long Walk to Water: Based on a True Story.

A Long Walk to Water: Based on a True Story from Gale. ©2005-2006 Thomson Gale, a part of the Thomson Corporation. All rights reserved.