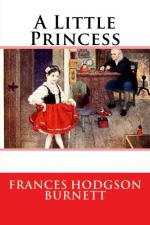 Plot Summary
+Chapters Summary and Analysis
Chapter 1: Sara
Chapter 2: A French Lesson
Chapter 3: Ermengarde
Chapter 4: Lottie
Chapter 5: Becky
Chapter 6: The Diamond Mines and Chapter 7: The Diamond Mines Again
Chapter 8: In the Attic and Chapter 9: Melchisedec
Chapter 10: The Indian Gentleman
Chapter 11: Ram Dass and Chapter 12: The Other Side of the Wall
Chapter 13: One of the Populace and Chapter 14: What Melchisedec Heard and Saw
Chapter 15: The Magic
Chapter 16: The Visitor
Chapter 17: "It is the Child" and Chapter 18: "I Tried Not to Be"
Chapter 19: Anne
Free Quiz
Characters
Symbols and Symbolism
Settings
Themes and Motifs
Styles
Quotes
Order our A Little Princess Study Guide

This Study Guide consists of approximately 59 pages of chapter summaries, quotes, character analysis, themes, and more - everything you need to sharpen your knowledge of A Little Princess.

This detailed literature summary also contains Quotes and a Free Quiz on A Little Princess by .

A Little Princess is a juvenile fiction story in the bildungsroman genre. It is the coming-of-age story of a young rich girl who is thrust into the harsh reality of servitude upon the sudden death of her father when she is only 11 years old. Until her father's death, Sara Crewe is treated like royalty at her private boarding school in London. Despite Captain Crewe's great wealth and his willingness to spend it on her, Sara remains sensible and caring, often sharing her comforts with her friends and giving money to the poor, just like a princess would do. The princess ideals are what keep Sara from losing her temper with the teachers and bullies at the school.

When Miss Minchin, the greedy school administrator, learns that Sara's father died suddenly after losing all his money in a diamond mine investment, she is ready to turn Sara out onto the streets. Captain Crewe's lawyer reminds her how that bad publicity would ruin her school. Instead, she immediately takes Sara away from her lavish birthday party, takes away all her finery, and sends her to the attic to live by Becky, a 14-year-old girl who is a servant at the school.

The rich neighbor's servant, Ram Dass, notices Sara in her attic room one day and they exchange greetings. When his monkey jumps into Sara's window, she asks him to come retrieve the monkey. He jumps onto her rooftop with ease and enters her room to retrieve the monkey. He notices her cold, bare room and tells his boss about the poor little girl who lives in the attic next door. Ram Dass begins keeping an eye on Sara through her skylight to make sure she is okay.

Even in her darkest time, while grieving the loss of her father, Sara holds her head up and continues to act like a princess. She still tries to be kind and giving even though she is penniless, tired and hungry. She deals with the segregation imposed upon servants, keeping her away from her two close friends, Lottie and Ermengarde. At night, the girls sometimes sneak to the attic to visit Sara. One night, when Sara was at her hungriest and coldest, Ermengarde brings a basket of goodies sent to her by an aunt to share with Sara and Becky in the attic. Miss Minchin catches them and is infuriated that Ermengarde is socializing with the help. She threatens to throw out Becky the next morning and punishes Sara by not letting her have meals the next day. Of course, she does not actually kick Becky out because she is not easily replaced.

After the turmoil with Miss Minchin, both girls go to bed tired, cold, and hungry, with no hope of a good meal in their near future. While Sara sleeps, Ram Dass, sneaks in through her skylight. He lights a fire in her grate, sets a table with food, leaves lots of bed coverings, and leaves a note saying the items are from a friend. Sara is awakened by the sound of the skylight closing and thinks she is in a dream. Her room is toasty and there is food. When she is sure it isn't a dream, she knocks on the wall to invite Becky to come enjoy it. Together, they get warm and have a good meal. Sara shares the bed coverings with Becky and they both feel so great the next morning that Miss Minchin is angered that they don't look ashamed or scorned.

As Sara learns bits and pieces about the rich neighbor next door from the kitchen staff, she grows fond of the man who sounds a lot like her father. He moved to London from India, where Sara had lived with her father before she attended boarding school. Unknown to Sara, the man next door is her father's business partner and he is searching for her. Instead of losing all of Captain Crewe's money, the diamond mine investment paid off shortly after his death. He is looking for Sara because he knows she is orphaned and he wants to take care of her and give her Captain Crewe's fortune.

Ram Dass and his rich boss continue sneaking gifts to Sara, even clothing which is delivered to the school. Seeing this, Miss Minchin relieves Sara of some of her work duties and allows her to attend class again, hoping Sara's secret benefactor will begin paying her tuition. One night, Ram Dass' monkey escapes and Sara finds him on her roof. She takes the little monkey in and tells Becky she will return him the next day. When she takes the monkey back, the rich neighbor, Mr. Carrisford, realizes that she is the girl for whom he has been searching.

Sara leaves the boarding school immediately and moves in with him. He makes arrangements for Lottie and Ermengarde to come visit and hires Becky to be Sara's assistant. Sara is happy to have a family again and asks if she can do something special with her money. Mr. Carrisford agrees and takes her the next day to a downtown bakery. The bakery woman gave Sara six buns when she only had enough money for four one day when she was a servant. Sara set up an account at the bakery to feed other hungry children. The baker agreed to feed all the hungry children and to bill the expense to Sara.

More summaries and resources for teaching or studying A Little Princess.