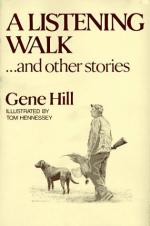 A Listening Walk --and Other Stories Summary & Study Guide

Gene Hill
This Study Guide consists of approximately 26 pages of chapter summaries, quotes, character analysis, themes, and more - everything you need to sharpen your knowledge of A Listening Walk --and Other Stories.

A Listening Walk --and Other Stories Summary & Study Guide Description

A Listening Walk --and Other Stories Summary & Study Guide includes comprehensive information and analysis to help you understand the book. This study guide contains the following sections:

This detailed literature summary also contains Topics for Discussion and a Free Quiz on A Listening Walk --and Other Stories by Gene Hill.

A Listening Walk and Other Stories by Gene Hill is a compilation of short articles (each approximately 1,500 words in length) Hill wrote for the hunting magazine Field & Stream. In these 58 articles, Hill demonstrates a deep love for nature and the sports of hunting and fishing, which he has made his life's passion. He frequently waxes philosophical about the sportsman's life.

Hill accomplishes a variety of things in his articles. He pays homage to game animals and fish in articles like "Once A Salmon Sang To Me" and "It's Not Just Fishing, It's Fate," particularly the Atlantic Salmon, which he considers a miracle of nature considering its great voyage upstream from the ocean to mate. He defends hunters and fishermen from so-called environmentalists and those advocating for strict gun control in articles like "No, I Have Not Thanked A Green Plant Today—I've Been Busy." Hill believes that conservationist hunters who treat nature with respect and who pay for wildlife conservation through licenses are the ones who truly care for wildlife, not those who feel hunting is a cruel sport.

In articles like "Equipment Time," Hill shares his love for amassing fishing and hunting equipment—even if he does not need it—and his love and care in preparing for guns, tackle, or other equipment that carry special memories or significances for him.

Hill is conservative in every sense of the word. He longs for "the good old days" when game was more plentiful, and hunters did not have to deal with so many rules, regulations, and the increasing scorn of the general public. In articles like "Wood Smoke," "A Question of Statistics" and "Too Many Leaders," Hill questions changes to the hunting culture, and wonders if a return to a simpler time would lead to more enjoyment of hunting.

Hill lends a lot of humor to his columns, and the columns themselves can take on a variety of forms. There are two horoscope-type columns included, in which Hill makes predictions about hunters based on the signs of the zodiac. In two "Annual Reports," Hill makes a humorous appeal to the "Chairperson of the Board" (his wife) in an attempt to hide his wasteful equipment purchases and time spent hunting in business jargon.

What chiefly emerges from A Listening Walk is Hill's belief that the act of hunting is a spiritual experience, and that hunting is not merely about capturing and killing animals, but it is about understanding one's place in the universe, establishing lasting friendships, and finding purpose.

More summaries and resources for teaching or studying A Listening Walk --and Other Stories.

A Listening Walk --and Other Stories from BookRags. (c)2022 BookRags, Inc. All rights reserved.