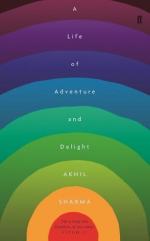 A Life of Adventure and Delight Summary & Study Guide

Sharma, Akhil
This Study Guide consists of approximately 45 pages of chapter summaries, quotes, character analysis, themes, and more - everything you need to sharpen your knowledge of A Life of Adventure and Delight.

A Life of Adventure and Delight Summary & Study Guide Description

A Life of Adventure and Delight Summary & Study Guide includes comprehensive information and analysis to help you understand the book. This study guide contains the following sections:

This detailed literature summary also contains Quotes and a Free Quiz on A Life of Adventure and Delight by Sharma, Akhil.

The following version of this book was used to create this guide: Sharma, Akhil. A Life of Adventure and Delight. W. W. Norton & Company, 2017. Kindle edition.

A Life of Adventure and Delight is a collection of eight short stories exploring family relationships and cultural influence on relationships. Sharma investigates the themes of marriage and loneliness, cultural expectations and limited options, womanhood and lack of power, love and manipulation.

“Cosmopolitan, Surrounded by Sleep and You Are Happy?” investigate the lives of Indian immigrant families living in suburban America. Cosmopolitan is a story of a retired AT &T engineer, Gopal Maurya, dealing with the sudden breakdown of his marriage. His renewed enthusiasm for life occurs only after he starts an affair with his neighbor, Mrs Shaw. Not having experience with American women, he looks to the magazine, Cosmopolitan, for guidance. Surrounded by Sleep follows the life of 10-year-old Ajay, whose life is now centered around his brother, Birju’s accident and subsequent coma. He copes with his changed situation by talking to an imaginary God in the form of Clark Kent. You Are Happy? is a story about Lakshman, a young boy who has to deal with his mother’s alcoholism and his father’s absenteeism. He is shocked by his mother’s sudden death and believes his father is responsible.

The challenges faced by young Indian men in their 20s are explored in “A Life of Adventure and Delight,” “A Heart is a Heavy Thing” and “The Well.” Gautama struggles with an internal conflict in A Life of Adventure and Delight. His move to New York has freed him of his family’s watchful eye. He hires prostitutes to explore his sexuality however he feels guilty and immoral and stops this behavior in order to pursue a more culturally acceptable relationship with a fellow NYU student, Nirmala. In A Heart is a Heavy Thing, Arun feels pressured by his father to marry and believes that it is the next logical step for him as he now has a job. Although he feels fearful before the marriage, he appears happy afterwards while his parents are concerned with his wife’s sanity and the absence of her dowry. The Well follows Pavan and his life in suburban New Jersey. Pavan quickly develops a crush on a white coworker at his first job. His attempts to manipulate and control her are explored throughout this story.

Two of Sharma’s short stories are written in the first person; “We Didn’t Like Him” and “If You Sing Like That For Me.” “We Didn’t Like Him” is told by an unnamed narrator who relates his interactions with a disliked relative, Manshu. The narrator explains how his dislike for Manshu extends back to his childhood. His difficult relationship with Manshu in adulthood is exacerbated when Manshu refuses to visit the narrator’s father in hospital and behaves badly at his funeral. Anita talks of her marriage and family in “If You Sing Like That For Me.” She tells us of her sudden love for her husband and how this abruptly ends. She relates her feelings of anxiety leading up to her marriage and the shock she feels once she is wedded. Her inability to stand up for herself and express her needs is highlighted throughout her story.

More summaries and resources for teaching or studying A Life of Adventure and Delight.

A Life of Adventure and Delight from BookRags. (c)2022 BookRags, Inc. All rights reserved.