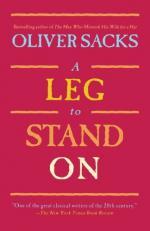 A Leg to Stand On Quotes

"I found the abyss a horror, and recovery a wonder; and I have since had a deeper sense of the horror and wonder which lurk behind life and which are concealed, as it were, behind the usual surface of health."
Preface, ix.

"To be full of strength and vigor one moment and virtually helpless next ... with all one's powers and faculties one moment and without them the next - such a change, such suddenness, is difficult to comprehend, and the mind casts about for explanations."
p. 4

"The organism, the nervous system, has an immense repertoire of 'trick movements' and 'backups' of every kind - completely automatic strategies, which are held 'in reserve'. We would have no idea of the resources which exist in potentia, if we did not see them called forth as needed."
p. 10

"There was something impersonal, or universal, in my feeling. I would not have...

A Leg to Stand On from BookRags. (c)2023 BookRags, Inc. All rights reserved.