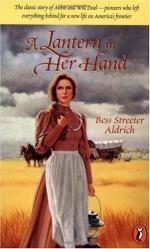 A Lantern in Her Hand Summary & Study Guide

Bess Streeter Aldrich
This Study Guide consists of approximately 34 pages of chapter summaries, quotes, character analysis, themes, and more - everything you need to sharpen your knowledge of A Lantern in Her Hand.

A Lantern in Her Hand Summary & Study Guide Description

A Lantern in Her Hand Summary & Study Guide includes comprehensive information and analysis to help you understand the book. This study guide contains the following sections:

This detailed literature summary also contains Topics for Discussion and a Free Quiz on A Lantern in Her Hand by Bess Streeter Aldrich.

A Lantern in Her Hand is a novel by Bess Streeter Aldrich. Abbie Deal is a true pioneer woman who lives her life on the Nebraska prairie. Abbie moves to Nebraska as a new bride and survives drought and plague as she and her husband build a farm they hope will one day bring them great wealth. Abbie dreams big, but many of her dreams never come true. As an older woman, however, Abbie comes to realize that her dreams did come true, just not for her. Abbie has lived long enough to see her children and grandchildren live the life she always wanted for herself. A Lantern in her Hand is not only a celebration of the pioneer women who helped build this country, but for the mothers who sacrificed so that their children could live their dreams.

Abbie Deal is eight years old when her family moves from Chicago to Blackhawk County, Iowa. Abbie meets Will Deal almost immediately and finds in him a friend she can depend on. As Abbie grows, she holds onto dreams of stardom, imagining herself a famous singer with paintings hanging in museums and books she has written lining library shelves. When Ed Matthews, the local doctor's son, hears Abbie sing, he immediately promises to take her to New York where she can take lessons if only she will marry him. Abbie readily agrees, but soon regrets her decision when she realizes that Will Deal is the only man she will ever love.

Abbie and Will marry and have a son almost immediately. When the baby is born, Abbie insists that her growing family needs a home of their own rather than living with Will's parents. Will agrees, but to Abbie's chagrin, has decided to move to Nebraska where the land is plentiful and cheap. Abbie has begun art and voice lessons and does not want to give them up. Will promises her that she will be able to continue her lessons as soon as a teacher becomes available.

Abbie is pregnant again as they begin their journey, therefore she spends much of the trip miserably ill. When they arrive in Nebraska, they are joined by two other families who have also bought land near the Deals. Abbie is grateful to have other women in the area, even if one of the other ladies is a foreign woman who is crass and difficult to get along with. Will builds a house out of sod for them to live in while they work the farm, promising Abbie that as soon as the farm begins to turn a profit he will build her a frame house.

The first few years in Nebraska are difficult ones for Abbie and Will. The soil is good, but a lack of rain causes the crops to grow small and dry. A plague of grasshoppers a few years later almost guarantees the farm's failure. However, Abbie and Will persevere with a little help from Will's parents. Abbie gives birth to three more children, including a little boy who is born stillborn. The population around them grows as well, a school is begun, a general store opens, and a doctor comes to town. Slowly the farm begins to turn a profit and Abbie finally gets that house she always wanted.

When their oldest child, Mack, becomes an adult, he decides he would rather live in the city than on the farm. Despite Will's disappointment, Mack moves to Omaha where he gets a job in a bank. A short time later a school opens in a nearby town where students are given classes that will prepare them for college. Abbie sacrifices a trip home to Iowa in order to send Margaret to the school. John joins Margaret the following year.

At forty, Abbie is shocked to discover she is pregnant once again. Abbie gives birth to a healthy baby girl during a snowstorm that would have taken her life if not for the help of her unpleasant neighbor. A few years pass by and Margaret announces her intention to marry a doctor she met while at school. Shortly after this, Will passes away. Abbie is left alone with three children and a farm to run. John helps as best as he can, but his heart is not in it. When Abbie learns that John wants to become a lawyer, she encourages him to go to school even if it means leaving her without a man to work the farm.

Abbie begins selling off the farm a little at a time to continue to pay for Isabelle and then Grace's education. Isabelle goes to Chicago after marrying and becomes a music teacher, then later a singer. Grace continues her education until she becomes a college professor. Before Abbie knows it, she is in her eighties, surrounded by children who do not understand her desire to live in the same old house alone, and seven grandchildren who find her quaint and old fashioned. When one of her granddaughter's marries, Abbie is finally able to share with her the pearl necklace her own mother saved from the glory days of the Mackenzie family, a necklace that symbolizes all the dreams Abbie once had for herself. As Abbie looks around her, she soon realizes that her dreams came true, for her children if not for herself. Abbie dies at home, in the house she and Will built together, satisfied with her life.

More summaries and resources for teaching or studying A Lantern in Her Hand.

A Lantern in Her Hand from BookRags. (c)2022 BookRags, Inc. All rights reserved.