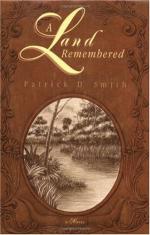 Patrick D. Smith
This Study Guide consists of approximately 43 pages of chapter summaries, quotes, character analysis, themes, and more - everything you need to sharpen your knowledge of A Land Remembered.

This detailed literature summary also contains Topics for Discussion and a Free Quiz on A Land Remembered by Patrick D. Smith.

A Land Remembered by Patrick D. Smith is the story of the MacIvey family whose history is recounted over a hundred-year span. The family founder, Tobias MacIvey, leaves pre-Civil War Georgia for Florida in search of a better life for his wife, Emma, and son, Zech, and ekes out a living for many years until he discovers an abundant life rounding up and selling cattle.

Tobias, Emma and Zech spend many years living in the Florida scrub country eating what little food Tobias can kill until Tobias finds a cow in a swamp and pens it in the hopes of finding more and selling them. Tobias is befriended by Keith Tiger, a Seminole Indian, who advises Tobias in how to graze cattle to fatten them up for market. Tobias then helps Skillit, a black man hiding out from vengeful slave haters, and Skillit helps Tobias and Zech increase their cattle count.

The MacIvey family spends many years driving cattle to market in Punta Rassa, Florida, and the tradition is carried on when Zech marries a girl named Glenda. Zech is torn, though, by his love for a Seminole Indian woman named Tawanda Cypress and maintains a long-term intimate relationship with Tawanda even though years pass between their visits. Zech eventually has two sons; Sol, whose mother is Glenda and Toby Cypress, whose mother is Tawanda.

After Tobias and Emma die, Zech becomes the head of the family carrying on not only the family's cattle business but also Tobias' fledgling orange groves. The family prospers and Zech purchases hundreds of thousands of acres of unspoiled Florida land for preservation not only for cattle grazing but also to keep the landscape untouched by outside influences.

Zech and Glenda each die in freak accidents and their son Sol is left to manage the MacIvey businesses but Sol leaves the homestead in search of a different kind of life. Sol eventually settles on some land near Miami and establishes a produce company, a real estate business and a bank.

Sol seeks out his half-brother, Toby Cypress, and the two men find that they are at cross purposes in life; Sol with business and land development; and Toby with preserving the land for the benefit of the native people and the wildlife who inhabit it. Sol's drive and ambition blind him to Toby's point of view until Sol witnesses his own home devastated by the greed and insensitivities of other men.

At the end of his life, Sol makes peace with Toby Cypress, establishing nature preserves in southern Florida and relinquishing the ties to his old life before dying in the MacIvey cabin in Punta Rassa, Florida in 1968.

More summaries and resources for teaching or studying A Land Remembered.