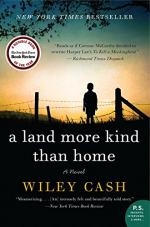 Wiley Cash
This Study Guide consists of approximately 44 pages of chapter summaries, quotes, character analysis, themes, and more - everything you need to sharpen your knowledge of A Land More Kind Than Home.

The author returns to Jess as his mouthpiece as he goes to visit his friend Joe Bill. He flashes back to eating dinner with his grandpa and discussing his mother and grandmother. He returns to the present, where he and Joe Bill discuss whether or not Stump will be in heaven because he was unable to give a final confession. They play outside until Joe Bill's brother returns, angry that Joe Bill had shot his gun. Jess runs away back to his house where he finds Ben, who asks him what happened to the rain barrel. Jess tells Ben what happened, revealing that Julie had been having an affair with Chambliss. Ben leaves the house and drives away leaving Jess alone in the house. He returns later that night, not having found Chambliss.

This sequence is important mainly for establishing...

More summaries and resources for teaching or studying A Land More Kind Than Home.