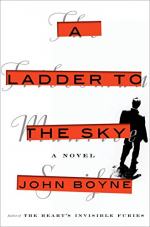 A Ladder to the Sky Summary & Study Guide

Boyne, John
This Study Guide consists of approximately 91 pages of chapter summaries, quotes, character analysis, themes, and more - everything you need to sharpen your knowledge of A Ladder to the Sky.

A Ladder to the Sky Summary & Study Guide Description

A Ladder to the Sky Summary & Study Guide includes comprehensive information and analysis to help you understand the book. This study guide contains the following sections:

This detailed literature summary also contains Quotes and a Free Quiz on A Ladder to the Sky by Boyne, John .

A Ladder to the Sky is a work of psychological fiction examining the motivation of Maurice Swift, a young aspiring writer with big ambitions. It is constructed in five distinct sections with each one told from a different point of view allowing varied perspectives on the effects of the main character's actions.

The novel begins as Erich Ackermann meets Maurice Swift in a hotel bar in West Berlin. The older man is overcome with desire for the young handsome waiter and is thrilled that the boy recognizes him as a famous writer. The two strike up a conversation and a relationship follows in which Maurice agrees to accompany Erich on his book tour to several cities throughout the world. Maurice is happy to soak up the advice of the Prize-winning novelist in his own pursuit of becoming a world-famous writer and one day winning the Prize. Erich hopes that in time the relationship will turn sexual. As the two spend time together, Maurice gives his mentor a few short stories to critique and Erich discovers that Maurice's writing is good but that he lacks the ability to tell a good story. Nevertheless, throughout the tour Maurice rubs shoulders with many editors, agents and writers, including the American writer, Dash Hardy. Dash is also enamored with Maurice and in exchange for a night's pleasure and the hope of more to come, publishes Maurice first short story.

While on tour, Maurice gets Erich talking about his past and over time draws out a long-hidden secret. Before the war began in Germany in 1939 he had fallen in love with his friend Oskar Gott and had hoped for a future together. However, Oskar was in love with a young girl who was part Jewish. Fearing for her safety, the couple made plans to escape the country, but Erich foiled their plans by alerting the authorities. In the ensuing arrest, Oskar, Alysse and her family are all killed or sent to the camps. Having discovered this shocking history, Maurice becomes cold toward Erich and ends their relationship, saying that he needed to now focus on his own writing career. In the next year, he published his first novel, a recreation of Erich's story, which brings shame to the older man. Dismissed from his job and discredited as a writer, he moves back to Germany to spend his last years in isolation.

As his career takes off, Maurice continues his relationship with Dash, in effect using him for his professional connections while giving him little sexual or emotional benefit in return. Dash introduces him to Gore Vidal during a visit to the literary icon’s estate in Italy, and Maurice hopes to gain the famous writer’s approval and endorsement. He offers himself to his host in the middle of the night, but Gore is all too aware of the young writer’s ambition and refuses to be used in exchange for a simple night's pleasure. He sees the heartache that Dash experiences, knowing that he too is being used for personal gain despite his sincere love for Maurice, and sends Maurice away.

The novel takes a unique turn as the third section is told in the second person as Maurice's wife, Edith, addresses her comments directly to Maurice. She recounts the events of the year they spent in Norwich while she taught a creative writing course at the university and worked on her second novel. The couple had been trying to have a child, a particularly strong desire for Maurice, but had experienced four miscarriages. One morning, Edith discovered that she was pregnant again and this time sensed that the baby would live. But as her day continued, she received a phone call from Maurice's agent and discovered that the novel he had just submitted for publication was her own. Having been unable to find inspiration for his next work, Maurice resorted to stealing Edith's. When she confronted Maurice, he begged her to simply let him take credit for the novel. They argued, and when Edith tripped and reached out to catch herself on the stair handrail, the long-broken rail gives way. Maurice reaches out and gives her slight push. It suddenly becomes evident that Edith's story is taking place inside her still active mind, despite lying unconscious in a hospital bed. With the baby gone, the novel stolen and success once more his, Maurice nods to the doctor to discontinue life support and Edith's story ends.

Many years later, Maurice is living in New York with his young son, conceived through a business arrangement. He has founded a literary magazine that publishes the work of beginning writers, but Maurice uses the operation as a front for regularly reviewing manuscripts and stealing the good ideas to craft his own novels. Maurice enjoys Daniel's company, but he also looks forward to the day when he will be on his own again. One day, Daniel is using his father's computer when he discovers all the files relating to Erich Ackermann, Edith and Dash. He realizes that he has no idea who his father really is and that he apparently killed the woman who may have been his mother after stealing her novel. As he confronts his father, his asthma acts up and he gasps for breath. He reaches for his inhaler, but Maurice quickly grabs it, withholding it from Daniel. He knows that Daniel will reveal his secrets and his career will be ruined. Despite Daniel's pleas, Maurice chooses to protect himself and the boy dies in front of him.

Maurice finally speaks in the last section of the novel. Feeling guilt over his son's death, he has returned to London and spends his days drinking in a variety of pubs. All hope may not be lost, however, as he is contacted by a young student with publishing ties who requests an interview. Under the premise of writing a thesis on Maurice's body of work, Theo Field spends hours interviewing Maurice about his past work and relationships. As he looks very similar to Daniel, Maurice is taken in by the young man and opens up to him. Just as Erich Ackermann once revealed his darkest secrets to him, Maurice now unwittingly tells all his dark secrets to Theo. Having been set up however, Theo, really the great-grand-nephew of Erich Ackermann, goes to the police, having taped Maurice as he confessed to two murders. Theo publishes a novel based on the entire story, which naturally becomes a best seller.

Maurice spends his final years in prison and believes them to be some of the best of his life. He can read and write daily, and he teaches a writing class. When his best student is murdered in a prison fight, Maurice takes the manuscript, polishes it up and submits it to a publisher. As a bestseller, Maurice hopes he still has a chance of winning the annual Prize.

More summaries and resources for teaching or studying A Ladder to the Sky.

A Ladder to the Sky from BookRags. (c)2022 BookRags, Inc. All rights reserved.