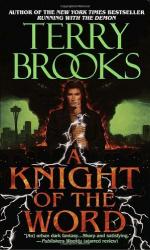 A Knight of the Word Summary & Study Guide

A Knight of the Word Summary & Study Guide Description

A Knight of the Word Summary & Study Guide includes comprehensive information and analysis to help you understand the book. This study guide contains the following sections:

This detailed literature summary also contains Topics for Discussion on A Knight of the Word by Terry Brooks.

A Knight of the Word by Terry Brooks is the story of John Ross's decision to stop being a Knight of the Word and the danger that it puts him and the rest of the world in. Ross refuses to believe that he is capable of falling into service of the Void even though he has stopped acting as Knight. Nest Freemark goes to Seattle to find John and try to warn him of the danger he is. Nest and John soon discover that the demon that is trying to subvert John is much closer than he could have ever realized and it will take Nest and John working together to save both their lives.

Nest Freemark is a nineteen-year-old college student who has the secret of magic that was passed down to her from her demon father. Nest comes home on the weekends and finds that the Lady of the Word, the force that fights for good, has sent a spirit to ask her to go and help John Ross, a fallen Knight of the Word, who helped to save Nest from her father. Nest agrees to go, feeling that she can't let John be hurt if she has the power to help him.

In the city of Seattle, John is trying to live a new life, although he has been warned that he was changed when the magic of the Word touched him. Nest arrives to tell John that he is in danger, although John doesn't think so. Before Nest leaves to go home, she is attacked by a demon and the office building where John works is set on fire. It becomes obvious that the demon is working to try and sway John to work for the Void, the darkness that wants the world destroyed. John and Nest try to figure out what is going on when John's dream changes so that he is accused of killing Nest. John tells Nest to go home and that he is going to leave the town so that none of the dream can come true. Nest goes to the airport, when she suddenly realizes that the demon is John's girlfriend. John is at his apartment when he is confronted by a reporter who was given an anonymous tip with documents that accuse John of stealing from the company he works for that helps homeless people. John is outraged, and when he gets to his apartment, he finds that he has been fired. John goes to confront his boss. The demon is in the form of John's boss and convinces John that it was his boss who is the demon. John almost kills his boss when Nest intervenes and tells him it is his girlfriend.

John goes back to his apartment and confronts the woman he loves, and ultimately she flees. Nest is outside when the demon lands on the ground and the two begin to fight. A powerful magic in Nest reacts to the demon and is able to hold her off until John gets downstairs. John kills the demon and resumes his battle as a Knight of the Word. Nest goes home, trying to find a way to deal with her new power, and John resumes his duties.

A Knight of the Word from BookRags. (c)2022 BookRags, Inc. All rights reserved.