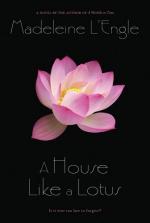 Madeleine L'Engle
This Study Guide consists of approximately 56 pages of chapter summaries, quotes, character analysis, themes, and more - everything you need to sharpen your knowledge of A House Like a Lotus.

"Mother tries not to put too much responsibility on me, and everybody has jobs, but if Mother's in the lab helping Daddy work out an equation, then I'm in charge, and believe me, all these brethren and sistren have about decided me on celibacy" (p. 11).

"The Bakians simply assumed, when the missionaries told them about the Son of God, that it was their statue, which had never before had a name" (p. 35).

"Yes, but I'm particularly interested in some parasites which are found largely in South America. They get into the bloodstream, and—to try to simplify a long procedure—eventually invade the heart" (p. 66).

"Zachary insisted on paying the entrance fee for both of us, and I was not happy about this. I didn't want to be beholden to some guy I had just met who came from the world of megabucks" (p. 72).

More summaries and resources for teaching or studying A House Like a Lotus.

A House Like a Lotus from BookRags. (c)2020 BookRags, Inc. All rights reserved.