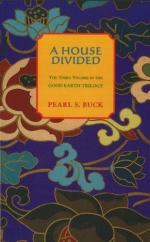 The place where Wang Yuan trains with the revolutionists. His former tutor serves as Captain. Here he hears about what the evil foreigners have done to his country, but also that Yuan's father is an enemy.

The ancestral home that belonged to Wang Yuan's grandfather when he was a farmer. Yuan escapes from home after leaving the school of war and wants to feel the earth under his feet. Two old tenants who live here fear Yuan as he stays with them for six days before his father's people retrieve him with news his father is ill.

Unnamed, this city along the coast brings together people from many cultures and ethnic backgrounds. Wealthy people live within this city, and where the wealthy are, the poor are found too. "Where the rich were, there were the poor beside them, the beggars...