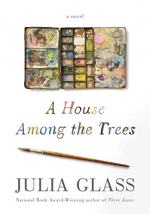 A House Among the Trees Summary & Study Guide

A House Among the Trees Summary & Study Guide Description

A House Among the Trees Summary & Study Guide includes comprehensive information and analysis to help you understand the book. This study guide contains the following sections:

This detailed literature summary also contains Quotes and a Free Quiz on A House Among the Trees by Glass, Julia .

The following version of this book was used to create this study guide: Glass, Julia. A House Among the Trees. Pantheon Books, 2017. Hardcover.

The story begins with Tomasina “Tommy” Daulair as she prepares for an actor to visit her newly acquired home. The previous tenant, Morty Leer - a children’s book author who she lived with for many years as his assistant - has passed away and Tommy is left with an inheritance and a complicated will. She struggles to overcome Morty’s death. Meanwhile, Nicholas “Nick” Greene, the actor in question, prepares for his visit with Tommy. He is playing Morty in a biographic film that was meant to be completed before Morty passed away. Nick describes Morty’s book called Colorquake. It is a children’s story that follows Ivo after an earthquake. Ivo befriends a panther that eventually brings him back to his village and his mother. Tommy and Nick finally meet and Tommy gives him a tour of the home, including the studio with all of Morty’s artwork.

Meanwhile, Meredith “Merry” Galanza has learned that Morty has not left any of his artwork for her new museum display despite his promise a few months before. She is upset because he gave all of his inheritance to Tommy, the caretaker. The narrator returns to Tommy who receives a letter from her brother Dani offering his condolences. She thinks back on the time when Dani discovered he was Morty’s muse for Ivo. In the meantime, Merry tries to convince Sol that she can get Morty’s paintings. He thinks they should focus on another author named Stuart, but Merry is confident she can get the paintings after ten years of friendship with Morty. Back with Tommy, she thinks on the day she met Morty for the first time. At 12 years old, she gave him permission to sketch Dani. The family left for Brooklyn and Tommy did not see him again for many years. After college, she met him in the children’s section of a local bookstore and asked for a job.

In the present, Tommy talks to Morty’s lawyer about Morty’s wish to create a runaway boy’s shelter called Ivo’s House. She also learns that Morty wanted her to be successful and live well off of his will. Then, the narrator shifts to a younger Tommy and her experience working for Morty who handled his fame quite well and was able to write many best sellers. A few months before his death, Merry asked to show his work at a museum, but Morty was secretly offended she would invite him and Stuart, an author that Morty despises. Back in the present, Merry attends a ceremony for Morty‘s death, but it is cut short when a thunderstorm hits. Back with Tommy, the reader learns that her relationship with Dani is rocky because he tried to steal a book from Morty. Meanwhile, Merry learns that her ex-husband is marrying a woman who is carrying his child. Stuart also has an offer for the museum, which Merry is not happy to hear.

Nick meets with director Andrew and tells him the truth of what happened to Morty in the shed. Previously, everyone thought he had been raped. Instead, Morty had seen many sexual acts while drawing. Meanwhile, Tommy thinks back to the day Morty’s mother was diagnosed with Alzheimer’s. Morty told her he would be gone for a week teaching, but ended up calling for her help after getting into a fight. Eventually, after weeks of going out to the city, he brought back a young man. Back in the present day, Nick meets Toby, the boy meant to play Ivo. The two are very excited to begin filming and Nick sees a younger version of himself. This makes him think back to when he met Emmelina Godine, who gave him a job working for her and encouraged him to get an education and become an actor. He later learns from Deirdre that Emmelina picked Nick because he would not judge her while the rest of the world did.

Tommy prepares for Nick's arrival, avoiding the projects Morty left for her. The author reveals the day Dani stole an extremely expensive book from Morty, but was caught by Tommy. The narrator then shifts to merry who learns that Stuart wants to create a twenty-first century display, which will put more emphasis on him. Meanwhile, Nick arrives at Tommy’s house and begins exploring. He finds a key in one of Morty’s coat pockets, but leaves it there. He and Tommy talk about his previous movie when Nick learns Toby’s mother is threatening to pull Toby from the movie. Nick decides to ignore it and does more exploring eventually finding Morty‘s laptop filled with e-mails to various people.

Now the story shifts to Morty’s time with Soren. The two fought often, but made up just as quickly. On the day Soren officially moved in, Tommy moved her room to the basement. Morty began hosting parties and Tommy prepared to tell him she was going to leave the job. However, shortly after the death of Morty’s mother, Soren was diagnosed with AIDS. Upon his death, Morty begged Tommy not to leave him. In the present, Nick reads the e-mails addressed to Leonard who Morty bought his childhood pieces from. The second e-mail is a man named Reg who attempted to blackmail Morty. Nick takes the laptop to Tommy and asks her to take the key and open Morty’s lockbox. When she does, they find all of his childhood drawings. Tommy reads all of the e-mails, including the one about the shed. Then, Merry and Dani arrive, uninvited. Nick reminisces on his last months with his mother, as he was the only one there when she passed away. In the present, Dani admits to Tommy that he was upset with Morty because he believed Morty owed him something for getting famous off of drawing him. The group talk about their parents, learning that each had some kind of tragic end. Nick gets a message that Toby has been pulled from the movie and Nick needs to leave for Los Angeles the next day. Everyone heads to bed, except Merry accidentally walks in on Nick and the two end up sleeping together. Upstairs, Tommy finally decides to complete the tasks Morty has left for her.

A week later, Tommy and Franklin began working on his will. They find letters from Reginald stuffed away in an expensive vase which Tommy promises to take care of. Meanwhile, Merry is happy that Tommy is returning all of her e-mails, as Stuart has threatened a takeover of the museum. Merry learns that Morty’s childhood pieces are up for auction and she begs Sol to purchase them. He says no, but an anonymous bidder buys all of them and donates them back to the museum. Months later, Tommy meets Nick at the park where she first met Morty. She lives in an apartment nearby, having sold Morty’s house. Tommy is obsessed with the movie, but understands how Dani feels because her character played such a small role. However, she tells Nick that his performance was perfect. Later, she meets with Dani who teases her about her relationship with Franklin who she is joining as a partner of a new practice. Six months later, Tommy goes to meet with the designer for Ivo’s House, and decides against speaking with Reginald. She meets back with Dani, who has accepted that he will forever be privately famous, and the two leave together.

A House Among the Trees from BookRags. (c)2022 BookRags, Inc. All rights reserved.