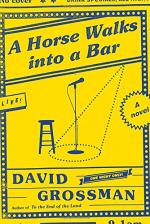 Related Topics
To the End of the Land

A Horse Walks Into a Bar Setting

David Grossman
This Study Guide consists of approximately 51 pages of chapter summaries, quotes, character analysis, themes, and more - everything you need to sharpen your knowledge of A Horse Walks Into a Bar.

The club where the performance takes place is in Netanya, the city near where both Azulai and Dovaleh grew up. The club attracts a variety of people and age groups, from young law students to aged bachelors and couples. One patron mentions coming to the club to escape the political turmoil that Dovaleh makes the subject of his jokes, suggesting that typical patrons think of comedy as a way to escape the challenges of living in Israel.

The camp both Dovaleh and Avishai attend as adolescents is a dark turning point for both characters; Avishai chooses to distance himself from Dovaleh in order to keep their peers from targeting him for bullying, and Dovaleh adopts self-mockery as a way to hide his grief from himself. The military-themed camp for adolescents may be a training...

More summaries and resources for teaching or studying A Horse Walks Into a Bar.

A Horse Walks Into a Bar from BookRags. (c)2022 BookRags, Inc. All rights reserved.