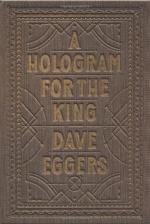 A Hologram for the King Summary & Study Guide

A Hologram for the King Summary & Study Guide Description

A Hologram for the King Summary & Study Guide includes comprehensive information and analysis to help you understand the book. This study guide contains the following sections:

This detailed literature summary also contains Topics for Discussion on A Hologram for the King by Dave Eggers.

A Hologram for the King is a novel by Dave Eggers that involves the attempts of American businessman Alan Clay to stabilize his finances, find happiness in life, and ensure his daughter has funds to continue her college education.

Alan works for Reliant Systems, a communications company, that has a hologram projection system it wants to present to King Abdullah of Saudi Arabia, in the hopes that it will get the job of installing IT at the new King Abdullah Economic City. Alan is assigned the presentation job because he knows the King's nephew. Alan is desperately seeking to get the job, because he is in debt by more than $100,000, and his daughter is in desperate need of college funds. Alan travels with a team to make the presentation.

While there, waiting for the king for more than three weeks, Alan meets a local named Yousef, and the two become friends. Yousef invites Alan up to his father's house in the mountains, where Alan is involved in a hunting accident which almost kills a young shepherd. Alan also has a a cyst on his back removed by Dr. Zahra Hakem, and the two begin a tentative, though short-lived, romance as Zahra goes to Paris on business. Alan's presentation to the King goes well, but Reliant does not get the IT job. Alan decides to stay on in Saudi Arabia, to attempt to convince the King to use Reliant in some other way.

A Hologram for the King from BookRags. (c)2022 BookRags, Inc. All rights reserved.