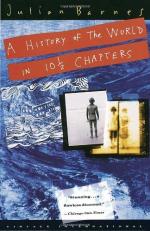 A History of the World in 10 1/2 Chapters Themes

Julian Barnes
This Study Guide consists of approximately 30 pages of chapter summaries, quotes, character analysis, themes, and more - everything you need to sharpen your knowledge of A History of the World in 10 1/2 Chapters.

One of the main themes used throughout "A History of the World in 10 ½ Chapters," by Julian Barnes, is the sea. The sea is a main part in "The Stowaway" as the story takes place almost entirely aboard Noah's Ark during the 5½ years it was at sea.

The sea is the setting used in all of the stories, at least in part. When one refers to the sea, it often means an ocean or other large body of water which may be another type of body of water.

The sea is the greatest enigma on earth. It is a paradox in that it can be gentle and beautiful or violent and ugly. Its creatures are too vast to be counted. The perfect example of this can be seen in "The Shipwreck." The crew of the Medusa first encounters a school of porpoises and later experiences the great strength...