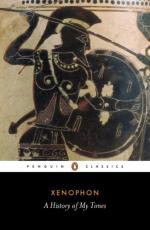 A History of My Times Summary & Study Guide

A History of My Times Summary & Study Guide Description

A History of My Times Summary & Study Guide includes comprehensive information and analysis to help you understand the book. This study guide contains the following sections:

This detailed literature summary also contains Topics for Discussion and a Free Quiz on A History of My Times by Xenophon.

Xenophon has provided the world with a fine piece of literature that describes the conditions in which he lived. During the very first introductions of the survey of the region of the era, it becomes clear that Xenophon was less loyal to Athens than he was either to his personal interests or else he was loyal to other principles. There may be a system to his loyalty, which is more discernible to readers by the end.

However, from the incredibly brief explanation given in the beginning, Xenophon was banished from his home state of Athens, even though he had served as one of its military officers partly, perhaps because he spent many years living under Spartan protection. These two nations were not the best of allies during this time making such a 'state of affairs' immediately suspect. He lived the ending of his life in Corinth.

This work of classical literature has been specifically designed in order to useful as a university textbook. The Penguin publishing company focuses on classical works. Since they have been designed for use by adults, the general public will also find them accessible and especially educational. This will suit those with sophisticated tastes.

Like the majority of works of this kind, there are scholarly supplements to the main body of the translated text. These occur both prior to and following after the central contents. The core of the book is dedicated to a thorough and insightful survey of the political and geographical region. The Mediterranean Sea has proven to be a literal and proverbial cultural oasis of humankind. Whether the Jews, the Arabs, Egyptians, Greeks or Romans it seems that 'Western civilization' was born and cradled here. There were other peoples but their cultures did not share the same attitude towards making things that lasted; many of them felt it was more important to leave no 'mess behind', no traces where they had lived that might damage the natural world. For whatever reason, the powers of these peoples have given a legacy to the world, of which Xenophon's writings coming out of the Grecian city-states of 2,350 years ago, is but one example.

Readers can work through this material in more than one way. There is a combination of cultural facts and factors included. Some sense of the relationship between religion and politics vis-a-vis military campaigns in this work. There is a presentation of the hierarchy, with a very clear expression that the entire matter rests on those who follow those who lead. One event cannot take place without both. This is concisely put through the anecdote of Xenophon's inability to found a city because his 10,000 won't do it. The majority need and like leadership, even though the leaders cannot do much without those who follow them. There are teachings in strategy and tactics. There are a very few wars, but virtually every battle takes place within the context of a campaign. There are several of these. In some cases, readers will be able to discern what the desired or intended results are, but in others the editor has to educate readers about what the goal actually is. Of course, for war buffs and historians there is also a wealth of information and there will be almost endless pleasure in this.

This work may be absorbed differently for those who are reading it for pleasure or with their own agenda than it is when part of a class at a university. The emphasis will be provided, often with explanation, by an instructor whereas in the event of reading for pleasure the individual's own needs will dictate what is focused upon.