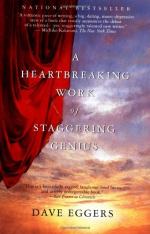 Dave Eggers
This Study Guide consists of approximately 35 pages of chapter summaries, quotes, character analysis, themes, and more - everything you need to sharpen your knowledge of A Heartbreaking Work of Staggering Genius.

This detailed literature summary also contains Topics for Discussion and a Free Quiz on A Heartbreaking Work of Staggering Genius by Dave Eggers.

A Heartbreaking Work of Staggering Genius is a memoir by magazine editor Dave Eggers. The book tells the story of how Dave's parents died of cancer within five weeks of each other and left Dave and his siblings custody of their seven year old brother, Toph. Dave tells his story with his trademark satire dripping from every word, allowing the reader to follow him on the ride from total irresponsibility to maturity and acceptance. This memoir is memorable and indeed heartbreaking, leaving the reader touched and yet strangely amused.

Dave's mother has a nose bleed and it will not stop. Dave knows that his mother's blood cell count is low and the doctor has warned that a simple nose bleed could cause her to bleed to death. However, Dave's mother does not want to go to the hospital. Dave finds himself wondering how long it will take for her to die and what he should do to prepare her, the family, and all their friends for the inevitable. Fortunately, Dave's sister Beth comes home and manages to talk their mother into going to the hospital.

Dave watches his mother sleep in her hospital bed and thinks about the last time he saw his father. Dave's father was in the hospital having what they believed were routine tests for his lung cancer. However, Dave's father died with little warning to the family. The funeral was a small affair with good friends in attendance. Dave spoke to one his father's closest friends; he was fixated on the way Dave's father drove. It surprised Dave how people remembered his father. It seemed like they had all known a different man from the one Dave had known.

They die within five weeks of each other. Dave, Beth, and their brother Bill pack up the house, sell it, and move to California. Bill is working in Los Angeles and Beth is about to start law school in Berkeley. Dave and his girlfriend, Kirsten, move in with Beth for a short time. Dave spends all his free time with his little brother, Toph, of whom he and Beth have legal custody. Dave feels it is important to show Toph a good summer after the difficulty of the past winter. However, when the summer ends, so does the lease on the house in which they are living. Beth finds an apartment in Berkeley and Kirsten finds a place of her own as well. Dave is left to find a place for himself and Toph, but finds it difficult to find a home when his only income is social security sent to his eight year old brother. Eventually, Dave finds a house close to Beth.

Dave finds it difficult to adjust to being a single parent. Dave has trouble organizing things in their house, often having to have paperwork from Toph's school sent to him more than once. Toph is late for school most days because Dave has difficulties getting out of bed. Dave often worries about Toph growing up with emotional problems because of his own ineptness as a parent and obsesses over the idea of social workers taking Toph away. Going out is something all people his age like to do, but Dave worries that Toph is going to injure himself if Dave leaves his alone; these thoughts pervade his mind any time he is away from his brother.

Dave begins work with a temp agency, using his artistic skills to add to their income. After a time, Dave gets together with friends and begins a magazine called Might. The magazine is targeted to young people in their twenties. The magazine struggles in the beginning but quickly finds a reasonably-sized readership. The magazine is satirical in nature, requiring its editors to pose naked on more than one occasion, and killing off one of the most beloved child stars of the seventies. After a time, however, the magazine begins to struggle financially and Dave realizes that the end is near.

Dave returns to Chicago and his hometown a few years after the deaths of his parents. After visiting his childhood home, Dave finds himself visiting the funeral home that processed his parents' bodies before they were donated to science. There Dave is given his mother's ashes, which had been returned to the funeral home by mistake. Dave takes the ashes and throws them into Lake Michigan, hoping it is something his mother would have wanted. This action helps Dave to deal with the deaths of his parents and move past the tragic memory their deaths have left on his life. Shortly afterward, Dave makes the decision to take Toph and move to New York. For the first time they will truly be on their own and Dave feels he is finally ready.

More summaries and resources for teaching or studying A Heartbreaking Work of Staggering Genius.