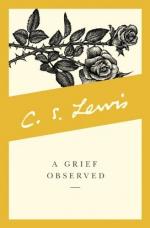 C. S. Lewis
This Study Guide consists of approximately 35 pages of chapter summaries, quotes, character analysis, themes, and more - everything you need to sharpen your knowledge of A Grief Observed.

This detailed literature summary also contains Topics for Discussion and a Free Quiz on A Grief Observed by C. S. Lewis.

A Grief Observed is a non-fiction reflection from author and theologian C.S. Lewis on the process of grieving for his wife, who died of cancer after three years of marriage. He keeps a journal throughout the months immediately following and very candidly describes his resulting anger and bewilderment at God, his observations of his impressions of life and his world without her, and his process of moving in and out of stages of grieving and remembering her. He ultimately comes to a revolutionary redefinition of his own characterization of God, and gains the ability to live gratefully for the gift of a true love as long as he was enrolled in that particular education.

The book is divided into four sections, simply headed with Roman numerals, each a collection of excerpts from his journals documenting scattered impressions and his continuously evolving state of mind.

In the beginning his writing is, as one would expect, raw, vulnerable, and at times startlingly angry. Lewis questions the benevolence, even the attentiveness of God, expresses distaste for all of the business of life and having to see all of the places where they were so happy and reveals that both of his parents were taken by cancer, as well. He speaks of a feeling of only veiled mental acuity, like he is watching life through a veil; or when he does feel her absence acutely he is tempted not to feel it, but to remember how happy he was in his long bachelorhood before his wife. He scolds himself for "maudlin tears", saying she would have disapproved of the self-indulgence of them. And, at the moments of his most desperate need of reassurance, Lewis describes the doors of heaven as being locked tightly against him.

In wondering at his struggling to understand God, Lewis confesses a fear not of losing his faith in God, but of coming to believe awful untruths about him: that He is willing to hurt us arbitrarily, without cause or compassion, that He is a capable ruler over the good and prosperous times, and conspicuously absent when our need is most dire.

Lewis discusses his body's being hers and being itself a constant reminder of her absence. He talks about the embarrassment of his sons whenever he broached the subject of their mother. He describes his and her intense intellectual intimacy, transcending emotion for perfectly honest and real intimacy.

As a part of their intimacy, there was in his wife a continuous call to a realistic view of things, and he has a conversation with his memory of her at one point about his "house of cards". He contends at a number of points that his belief in God has not so much been in God for Who He is, but in a set of hopeful ideas of his own construction, that set being as fragile as a house of cards ("merely verbal thinking and his merely notional beliefs"). His reflection on the mental discipline of his wife leads him to conclude that the sooner his house of cards is knocked over to make room for a real and substantial faith, the better.

In the latter half of the book, Lewis is both emerging from the anger he expressed in the first half and coming to enjoy the clear memory of his wife as it becomes less clouded by his grief. His view of God moves securely away from Him as the Cosmic Sadist to a place in which he understands God's intention for the loss of a spouse as an expected and necessary next step, as much as marriage is the logical step following courtship. His tone resumes the wise and clear-thinking voice his readers know and love. Ultimately, his reflections from the beginning become launching points for tangible and applicable wisdom.

Lewis concludes that God does in fact use the necessary pain in our lives to teach us to know and trust Him as He is, and that for God to give us comfort we have to be through the consuming grief enough to be able to receive it.

More summaries and resources for teaching or studying A Grief Observed.