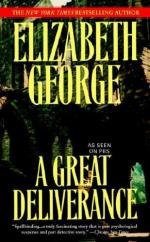 Elizabeth George
This Study Guide consists of approximately 38 pages of chapter summaries, quotes, character analysis, themes, and more - everything you need to sharpen your knowledge of A Great Deliverance.

This detailed literature summary also contains Topics for Discussion and a Free Quiz on A Great Deliverance by Elizabeth George.

Elizabeth George's first novel, A Great Deliverance, finds Inspector Thomas Lynley of New Scotland Yard in the small northern village of Keldale on the wild Yorkshire moors. Inspector Lynley, who also happens to be the 8th Earl of Asherton and a born aristocrat, is investigating a murder there with Sergeant Barbara Havers. Sergeant Havers was recently demoted for being difficult to work with, and the William Teys murder case is her opportunity for reinstatement at CID (Criminal Investigations Department of the British Police). There is a problem, however. Havers detests Inspector Lynley. He is a womanizer and a rogue as far as Havers is concerned. Havers is convinced that Lynley looks down his nose at anyone other than the high-born and beautiful: Havers is neither. Living in the working-class neighborhood of Acton, Havers is painfully aware of the class difference which exists between herself and Lynley. Living with her aging, ailing parents, Havers knows that getting back into CID is her ticket out of poverty and squalor.

Roberta Teys, the murder victim's youngest daughter, has confessed to decapitating William Teys with an axe. Subsequently, Roberta is sent to Barnstingham Mental Asylum by her cousin, Richard Gibson, who stands to inherit William Teys' farm. When Inspector Lynley and Sergeant Havers arrive in Keldale, the village is deserted. After checking into Keldale Lodge, however, the peaceful village becomes the site of petty jealousies, romantic rivalries, and deadly secrets. It seems that William Teys was someone who was well-liked and respected in his community. It is strange then that Teys' young wife Tessa would abandon him and their two daughters shortly after Roberta's birth. It seems even stranger that Roberta's older sister, Gillian, would run away from home at the age of sixteen never to be heard from again.

The inhabitants of Keldale are a colorful lot. The parish priest, Father Hart is a chain-smoker with a very nervous disposition. Mrs. Burton-Thomas, an eccentric aristocrat, has turned her ancestral home, Keldale Hall, into an upscale destination for travelers with money. Ezra Farmington, the handsome local artist, was never on good terms with William Teys. Nigel Parrish, the snooty church organist, has quite a few secrets of his own. The startlingly beautiful Stepha Odell seems to know details associated with the murder case that no one else in Keldale knows. And finally, there is the matter of the baby ghost whose cries originate from the stones of ancient Keldale Abbey.

Inspector Lynley and Sergeant Havers have their hands full and the folks in Keldale are determined not to make this an easy investigation for the unlikely pair.

More summaries and resources for teaching or studying A Great Deliverance.