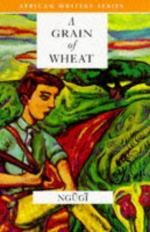 Ngũgĩ wa Thiong'o
This Study Guide consists of approximately 42 pages of chapter summaries, quotes, character analysis, themes, and more - everything you need to sharpen your knowledge of A Grain of Wheat.

A Grain of Wheat Summary & Study Guide includes comprehensive information and analysis to help you understand the book. This study guide contains the following sections:

This detailed literature summary also contains Topics for Discussion and a Free Quiz on A Grain of Wheat by Ngũgĩ wa Thiong'o.

A Grain of Wheat chronicles the events leading up to Kenyan independence, or Uruhu, in a Kenyan village. Gikonyo and Mumbi are newlyweds in love when Gikonyo is sent to detention. When he comes back six years later, Mumbi has carried and given birth to his rival's child. Instead of talking about their trials, a wall of anger separates them. Mumbi's brother Kihika, a local hero, is captured and hanged, and his comrades search for the betrayer. Mugo becomes a hero through leading a hunger strike in detention, and the town wants him to become a political leader. Mugo, though, struggles with guilt and ultimately confesses that he betrayed Kihika.

At the beginning of the novel, as independence approaches, several visitors come to Mugo's door. They ask him to speak at the Uruhu celebration and become a leader, and also ask if Kihika mentioned Karanja, a worker for the white government who is suspected of betraying his friend, before his death. Kihika, a rebel fighter from the village, was captured and publicly hanged. Mugo denies knowing anything about Kihika's death and says he'll think about making the speech.

Gikonyo, one of the men who asks Mugo to speak, feels his life falling apart after coming home from detention camps. As a young man, he is deeply in love with Mumbi, and his rival is Karanja. Mumbi chooses Gikonyo, and they marry. Gikonyo, a carpenter, is happy, but he is arrested as a rebel. Gikonyo spends six years in concentration camps, even after he confesses his oath to the Movement, in order to come back home. He feels guilty about his confession. When he returns home, though, his wife has a child by another man, Karanja. Gikonyo refuses to talk about the child or to share a bed with his wife, and throws himself into work in his distress.

While Gikonyo is away, the town is punished. The huts are burned down and the people are forced to rebuild in a contained area. They are put into forced labor building a trench around the town, and they have no food. People are beaten, raped, and starved. During this time, Mugo protests a guard beating a woman in a trench and is arrested and taken away. Mumbi works hard and is faithful to Gikonyo, though she doesn't know if he's alive or dead. She finds out finally that Gikonyo is coming home, and in a moment of weakness, allows Karanja to have sex with her. Afterwards, she rejects him again, and never wants to see him. Karanja has embraced the white government to gain power.

Meanwhile, Mugo struggles with his own guilt. Before Karanja's death, he hopes to have a quiet life, building a home, business, and family. One day after shooting a government official, Karanja comes to his house and asks him to join the Movement. Mugo is afraid that either the rebels or the government will kill him. He turns Karanja over to the government, but immediately regrets it.

At the detention camp for intervening in the beating, Mugo truthfully claims to have taken no rebel oath. No one believes him. He is beaten mercilessly and inspires a hunger strike. Afterwards, the townspeople consider him a hero, but Mugo is driven by his conscience to confess at the Ururhu celebration, and later is taken away by the former Freedom Fighters to be punished. Also at the celebration, Gikonyo breaks his arm. In the hospital, he realizes that he needs to open up communication with Mumbi and that he wants to rebuild their marriage.

A Grain of Wheat from BookRags. (c)2022 BookRags, Inc. All rights reserved.