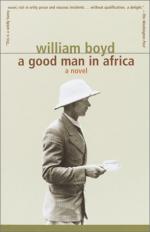 William Boyd (writer)
This Study Guide consists of approximately 44 pages of chapter summaries, quotes, character analysis, themes, and more - everything you need to sharpen your knowledge of A Good Man in Africa.

A Good Man in Africa Summary & Study Guide includes comprehensive information and analysis to help you understand the book. This study guide contains the following sections:

This detailed literature summary also contains Topics for Discussion and a Free Quiz on A Good Man in Africa by William Boyd (writer).

A Good Man in Africa by William Boyd is a novel that deals with the interests and intrigues of its main character, Morgan Leafy. He is the First Secretary of the British High Commission, and his posting is in the town of Nkongsamba, state capital of the Mid-Western region, Kinjanja, West Africa. Morgan Leafy is a man who lets the cultural, political, and social mores of the region shape his behavior. Instead of solely concentrating on his governmental duties during his working hours, he pursues his own interests in tandem with them. The result is a collision of his personal affairs with his professional duties. His professional duties typically lose out. This causes Morgan Leafy much grief, and this grief over wrong decisions made, is the thrust of the novel, coupled with other circumstances far beyond his control.

Sam Adekunle is a politician, university professor, and business owner running for office in Kinjanja. He is blackmailing Morgan because Morgan had an affair with Sam's wife Celia Adekunle. His desire is to make Morgan Leafy bribe Dr. Alex Murray. Sam Adekunle has an interest in a building project at the university in town. The university wants to build a new 500-room hall of residence and cafeteria. The land that they want to build the hall on belongs to Adekunle. He has a desire to sell this land to the university. The university does not know that he owns it, as it's under another business name. Dr. Alex Murray is Chairman of the university committee that considers the viability of university building projects. Dr. Murray intends to file a negative report on the proposed site. Adekunle needs him to issue a positive report so he can sell the land and reap the profits. Thus, Sam Adekunle is forcing Morgan to be part of his bribe plan, on the threat that he will expose Morgan's affair with his wife Celia to Morgan's superiors.

Morgan's boss is Arthur Fanshawe who wants to cozy up to Sam Adekunle so Britain will have influence in the country should Adekunle win the election. Arthur concocts Project Kingpin that he and Morgan will pursue to gain favor with Adekunle. Britain knows Kinjanja has great oil reserves and wants access to it. Therefore, the novel involves Britain wooing Sam Adekunle to gain favor with him, while Adekunle woos Dr. Alex Murray to gain favor with him. In the middle is Morgan Leafy who must bow to the wishes of his superior and his blackmailer. While all of this is happening, Morgan Leafy tries to make sense of his personal life. He pursues dalliances with different women. He loves Priscilla Fanshawe, Arthur's daughter, but circumstances have brought that relationship to a halt. Morgan also keeps a mistress on the side, Hazel, whom he frequents when his needs for physical intimacy arises. He is also having an affair with the aforementioned Celia Adekunle. Tragedy also interferes with Morgan's life in Nkongsamba. A female servant of the British High Commission, named Innocence, died from a lightning strike. Her body lies on the Commission grounds and Arthur Fanshawe charges Morgan with having the body removed. The problem is the native servants working at the Commission are blocking this removal, as they believe a particular tribal rite must take place to appease the god Shango, whom they believe is responsible for Innocence's death. A Good Man in Africa is a story of how Morgan Leafy must negotiate all the trials and tribulations in his life to regain control of his life; a life in a state of chaos because of choices he made to feed his own self-interests.

More summaries and resources for teaching or studying A Good Man in Africa.

A Good Man in Africa from BookRags. (c)2022 BookRags, Inc. All rights reserved.