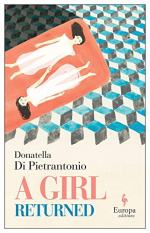 Donatella Di Pietrantonio
This Study Guide consists of approximately 47 pages of chapter summaries, quotes, character analysis, themes, and more - everything you need to sharpen your knowledge of A Girl Returned.

This detailed literature summary also contains Quotes and a Free Quiz on A Girl Returned by Donatella Di Pietrantonio.

In August 1975, at 13 years old, the unnamed narrator's adoptive parents bring her to live with her birth parents, whom she has not met. The narrator believes that she is being returned because her adoptive mother has gotten sick and hopes to return to her adoptive parents when her mother recovers. However, she has not been given a reason for this upheaval in her life and she also wonders if her birth parents might have asked to have her back. The narrator's new life is a sharp contrast to the one to which she is accustomed. Instead of a happy family life living in a city by the sea, she is now living in poverty in a neglectful and abusive household in a small town. She shares a bedroom with her many new siblings, including the boys. The eldest, Vincenzo, who is nearly 18, is obviously interested in her developing body. Her only sister, Adriana, wets the bed she shares with the narrator every night.

Though she is bullied by her brother Sergio and another unnamed brother, the narrator forms a bond with Adriana and Vincenzo respectively. The sisters take care of their baby brother and help out around the house. The narrator's relationship with Vincenzo is full of sexual tension; they don't seem to think of each other as siblings. Upon hearing about the poor living conditions at the narrator's new house, her adoptive mother Adalgisa sends her some new things and some money, but she does not contact her daughter either by phone or letter. The narrator saves up some of the money to take Adriana and Vincenzo to the beach where she grew up. She sees that her old house looks abandoned and wonders what has happened to her adoptive parents. While swimming, Vincenzo kisses her on the lips.

Amid the abuse, neglect, and relative deprivation in the household, the narrator continues to bond with her sister. She starts school in the fall and her academic excellence is immediately clear to both her teacher and her classmates. One day in October, Vincenzo is killed in a motor scooter accident. It is suspected that he was participating in a robbery right before the accident, but it is alleged and not proven. The narrator's birth mother sinks into deep grief, leaving her daughters to care for the family by scraping together enough money for food and cooking the meals. Eventually, Adriana and the narrator find a stash of money Vincenzo had been hiding, which they use to buy necessities for the family and to pay the debt incurred from Vincenzo's funeral costs.

It is soon decided that the narrator will move back to the city to go to a good high school the following school year, and that Adalgisa will pay for her expenses. The narrator hopes to return to her adoptive parents but soon learns that they will not take her back. Instead, she is sent to board with a nice family. In the year since she was returned, she still hasn't seen her adoptive mother, still does not know the reason for all this upheaval in her life, and has no way of getting in touch with Adalgisa. On a visit home to the town on the weekend, Adriana finally reveals the truth: the narrator was returned because Adalgisa had an affair and became pregnant by another man. Her marriage ended and she is now living with her new partner and biological child. The narrator is devastated and angry that everyone seems to have known and refused to tell her.

Upon learning that Adalgisa comes by the house where she is living once a month to pay for her expenses, the narrator contrives to stay home from school in order to confront her. Adalgisa tries to explain that she loves her and that the decisions in the wake of her affair and pregnancy were not hers alone. After this meeting, Adalgisa starts to reappear in the narrator's life, bringing gifts and showing up to walk her home from school. Her presence is sporadic however and the narrator keeps her at an arm's length. After several months, the narrator finally agrees to have lunch with Adalgisa and her new family in the house by the beach where she once lived with her adoptive parents.

At the lunch, to which she brings Adriana, the narrator meets Adalgisa's new partner Guido. The event starts well, Guido is warm and friendly. However, during the meal, the baby who has been sleeping in another room begins to cry. Guido refuses to let anyone go in to see him, expecting his son to learn to self-sooth. The crying escalates considerably, as does the tension and discomfort of the lunch. Finally, Adriana goes and gets the baby. Guido erupts in fury, but quickly calms down after hearing that his child had gotten his hands stuck in the bars of his crib. In the wake of this painful event, the sisters leave quickly. They go down to the beach and swim in the sea. In the water, the narrator contemplates her sister, thinking "From her I learned resistance. We look less like each other now, but we find the same meaning in this being thrown into the world. In our alliance we survived" (Loc 2003).

More summaries and resources for teaching or studying A Girl Returned.