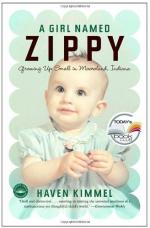 Haven Kimmel
This Study Guide consists of approximately 29 pages of chapter summaries, quotes, character analysis, themes, and more - everything you need to sharpen your knowledge of A Girl Named Zippy.

This detailed literature summary also contains Topics for Discussion and a Free Quiz on A Girl Named Zippy: Growing Up Small in Mooreland, Indiana by Haven Kimmel.

"A Girl Named Zippy" is the memoir of Haven (Jarvis) Kimmel about her childhood in Mooreland, Indiana, a small town that houses a mere 300 residents. Living in a small town is not without conflict and adventure, as Kimmel demonstrates throughout the book. She describes pets she has gained and lost, encounters she has with neighbors, relationships with family members and hard life lessons learned, unwillingly in most cases.

Kimmel, who is a strange-looking child with an oddly shaped head, large eyes, and tufts of hair, is nicknamed Zippy by her father, Bob Jarvis, who sees a chimpanzee of the same name performing tricks on a television show. Zippy grows up in the Jarvis family, which is comprised of her father, her bookworm mother Dee Dee, her beautiful and kind sister Melinda and her handsome but moody brother Daniel. Zippy is the youngest in the family—arriving a full ten years after her closest sibling. As a baby, Zippy contracts a bad staph infection in her ear, to which her pediatrician attributes her inability to speak. Once she starts speaking, her curiosity cannot be contained and she even ends up speaking for her friend Julie who refuses to talk.

Zippy's father is a prominent character in the stories—he is the disciplinarian in the household as well as the protector. Zippy regales the audience with tales of her father showing her what his church is like, how he put their cranky neighbor in his place when the neighbor complains about the doors, and how he cleaned up her beloved, deceased hen's coop so she would not be reminded of her loss.

A lot of animals that Zippy possesses a deep love for come and go through her life—deformed dogs, sick woodpeckers, ponies, runt pigs. Neighbors also come and go from the house next door including Zippy's crush (whom Zippy describes as being an ideal specimen) and a bully and tormentor of animals (Petey Scroggs). Throughout the course of the book, Zippy goes camping, is hypnotized by a rabbit, roots for her sister in the Fair Queen contest, sits for a dog (an experience that ends in a death), spies on the town witch, attends Sunday school and helps her dad build a grown-up bike.

Along the way, some of her coming-of-age experiences include that Zippy witnesses the slaughter of animals for meat, discovers her neighbor had an animal graveyard in her house, protects a friend from an inappropriate music teacher, and becomes a do-gooder without realizing it. The book concludes with Zippy maturely and bravely putting on a happy face when her best friend receives the Christmas present she covets; Zippy is ultimately rewarded for her behavior.

More summaries and resources for teaching or studying A Girl Named Zippy: Growing Up Small in Mooreland, Indiana.