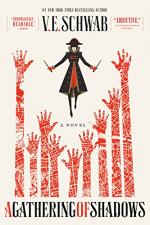 Related Topics
A Darker Shade of Magic: A Novel
A Conjuring of Light
The Invisible Life of Addie LaRue

V. E. Schwab
This Study Guide consists of approximately 52 pages of chapter summaries, quotes, character analysis, themes, and more - everything you need to sharpen your knowledge of A Gathering of Shadows.

A Gathering of Shadows Summary & Study Guide includes comprehensive information and analysis to help you understand the book. This study guide contains the following sections:

This detailed literature summary also contains Quotes and a Free Quiz on A Gathering of Shadows by V. E. Schwab.

The following version of this book was used to create this study guide: Schwab, V. E. A Gathering of Shadows. Tor. 2016.

A Gathering of Shadows is a fantasy novel of magic by V. E. Schwab. It is the second installment in Schwab's trilogy, Darker Shade of Magic. The plot follows the continuing efforts of Lila, Kell, Rhy, and Emery to adjust to a changed set of worlds. When the novel begins, Rhy is bitter as he knows he owes his life to his brother, Kell. It was Kell who bound Rhy’s life to Kell’s soul, thereby saving Rhy’s life. This means that so long as Kell lives, Rhy lives. Thus, the negative feelings and physical pains experienced by one are experienced by the other.

Kell himself is an Antari, possessing one normal eye and one totally black eye. He also possesses an extraordinary amount of magical power. Kell is happy to have saved Rhy, but he resents King Maxim and Queen Emira for two reasons. First, they blame him for the events that nearly led to the destruction of Red London. They also force Kell to live under guard and to obey strict rules in order to protect and preserve Rhy’s life. Rhy, meanwhile, has been tasked with overseeing the Element Games, a magic tournament between competitors of the three dominant empires in the Red world meant to bring about unity and allow empires to size one another without engaging in war.

At the same time, Lila, who was set adrift at sea following her ship’s kidnapping and her husband’s death in the previous book, is picked up by Alucard Emery, captain of the Night Spire. Lila becomes a member of the crew by killing one of the existing members. Emery begins to train her in magic. Emery explains he is set to compete in the Element Games. Lila herself is anxious to return to Red London because she wants to see Kell. She decides she will sneak into the Element Games to compete.

When the Night Spire docks in Red London, Lila puts her plan into action by kidnapping another competitor in the Element Games, Stasion Elsor. She takes his competition outfit and mask. Rhy, who feels bad for Kell, makes it so that Kell can enter the competition in disguise. Rhy says that he owes this to Kell. As the tournament gets underway, Kell, Emery, and Lila advance through the ranks. However, Kell’s absence from the palace when he sneaks to the tournament enrages the King. He does not know what Kell is up to, so he lectures Kell on responsibility and commands him to remain in the palace to protect Rhy. Kell continues to sneak out, and he is stunned when he faces down Lila in a match. Kell must throw the match to exit the competition.

When it is learned that Kell has left the palace, Maxim has Kell arrested and imprisoned following the close of the tournament, which is won by Emery. Lila and Rhy plot to rescue Kell. The King visits Kell in prison, only for Kell to walk out. Kell has told the King that the King is powerless to stop him because Kell himself is so magically powerful. Out in Red London, Kell is confronted by another Antari, a woman named Ojka who serves Holland, a former friend and ally of Kell. Holland has given up morality in death, having his body possessed by the demon Osaron in the hopes of saving White London. Osaron and Holland have struck a deal: if Holland can provide a new body for Osaron to inhabit, Osaron will leave Holland to himself. If not, Osaron will retain and take over Holland’s body. Ojka kidnaps Kell for use by Osaron, but Kell fights the evil of Osaron, stunned that Holland should be in any kind of arrangement with Holland at all. Osaron thus comes into full control of Holland’s body. Meanwhile, Rhy, the King, and the Queen are panicked at Kell’s disappearance. Lila takes the lead by deciding to journey to White London to save Kell as the novel ends.

More summaries and resources for teaching or studying A Gathering of Shadows.

A Gathering of Shadows from BookRags. (c)2021 BookRags, Inc. All rights reserved.