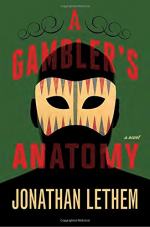 Berlin is the capital of Germany and the first setting given in the novel. Bruno has arrived their recently after a major backgammon loss in Singapore, and he attempts to set things right by playing against a wealthy Berlin real-estate speculator named Wolf-Dirk Kohler. After Bruno collapses during their game, he is sent to a nearby hospital where the doctors discover that Bruno has a brain tumor. Bruno also meets Madcehn in Berlin, with whom he flirts, exchanges numbers, and seem to form a spontaneous connection.

Singapore is a sovereign city-state in southeast Asia. There, Alexander Bruno runs in to old high school acquaintance Keith Stolarsky and spends a night playing backgammon against him. The next day, Bruno plays against Yik Tho Lim, a business partner of Edgar Falk, in a game Falk had arranged. Bruno surprisingly loses this game, marking the beginning of the reversal of...