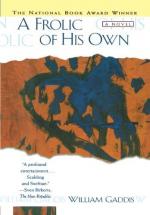 Oscar seats a guest, Harold Basie, in Grandfather's chair and asks him to read Act 1. Scene 1, where the authoritative, patronizing, unimaginative, unyielding Major shows shorter, unkempt, shrewd Mr. Kane, a former fellow in philosophy, around Quantness, the last of whose cotton awaits shipping overseas. The Major is pointing out elegant touches in the parlor when Kane sees the Major's son, William, to whom he is reluctantly introduced.

Basie interrupts, hoping to forestall reading the entire script, admitting Oscar's lawsuit could be a landmark if they win. Today's newspaper implicates that the producer, Kiester, adopted deceptive practices in making his previous blockbuster, Uburubu. Oscar steers Basie back to the script, saying stealing someone's creation and turning it into a hog pen is worse than stealing money.

(read more from the Section 4 (through page 96) Summary)

A Frolic of His Own from BookRags. (c)2023 BookRags, Inc. All rights reserved.