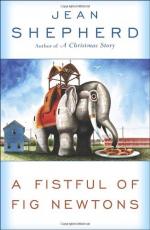 A Fistful of Fig Newtons Quotes

"I, however, was like one of those poor yaps who gets sucked into a bar fight and begins swinging wildly at everything in sight, only to wind up with a broken hand from hitting the gum machine and thirty days in the can." A Fistful of Fig Newtons or the Shoot-Out in Room 303, p. 23

"Within moments the bedraggled mob, covered with lumps and scratching unashamedly, huddled in the living room, myself among them, taking solace in the obvious fact that Mother Nature bites and stings all men, rich and poor alike, especially in New Jersey." The Light at the End of the Tunnel, p. 37

"If we hadn't been on this great detail, we might have been wasting our time playing ball or puffing on butts." The Mole People Battle the Forces of Darkness, p. 69

"It was then that my mind really took off. Here we were, sealed in...

A Fistful of Fig Newtons from BookRags. (c)2023 BookRags, Inc. All rights reserved.