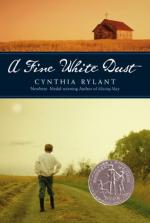 Cynthia Rylant
This Study Guide consists of approximately 34 pages of chapter summaries, quotes, character analysis, themes, and more - everything you need to sharpen your knowledge of A Fine White Dust.

Pete and Rufus enjoyed eighth grade together. They both went out for football. Rufus played more but Pete was happy to sit on the bench and cheer his friend on. Pete helped Rufus pass English. Rufus was still a confirmed atheist and Pete went to church, but no as often. Pete realized that outside of church, the real earth was comprised of all kinds of good people—people like Rufus who were non-believers and people like his parents who were not spiritual and were private about their beliefs.

A year after Preacher Man, Pete knew he still needed God but didn't know exactly how to find Him. That was why he found it difficult to throw the pieces of his cross away. The day he saved the pieces and put them away in a drawer, he had thought he was...

(read more from the Amen Summary)

More summaries and resources for teaching or studying A Fine White Dust.

A Fine White Dust from Gale. ©2005-2006 Thomson Gale, a part of the Thomson Corporation. All rights reserved.