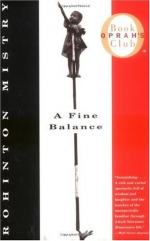 Rohinton Mistry
This Study Guide consists of approximately 86 pages of chapter summaries, quotes, character analysis, themes, and more - everything you need to sharpen your knowledge of A Fine Balance.

This detailed literature summary also contains Topics for Discussion and a Free Quiz on A Fine Balance by Rohinton Mistry.

After her father died when she was young, Dina Shroff was raised by her strict brother Nusswan. One night at the cinema, she met Rustom Dalal, and after a couple weeks, the two fell in love and got married. On their third anniversary, however, Rustom has a bicycle accident and is killed, leaving Dina alone. After Rustom's aunt teaches Dina sewing, Dina pays her rent by being a tailor. However, her eyes begin to deteriorate, so she is forced to find another means of income. Her friend, Zenobia, finds a border to rent out one of the rooms in Dina's flat and also introduces Dina to Mrs. Gupta, who offers her tailoring piece work if she can employ two tailors.

Originally from a family of cobblers, Ishvar and his brother, Narayan, are sent by their father to Ashraf Chacha to become apprentice tailors. Once they had finished their apprentiship, Narayan returns to his village, marries and starts up a successful tailoring business. His wife gives birth to a son, Omprakesh, and when he is of age, he is sent to Ashraf to also learn to be a tailor. During an election, Narayan, being of a lower caste, decides that he would like to have his own vote rather than having the upper caste members vote for him. For holding this opinion, he is tortured and killed, and his family burnt alive in their hut. Only Ishvar and Om survived because they were with Ashraf. The pair remained at the tailor shop until business started to slow down, and then they headed into the city to look for work. After six months of living on Nawaz's balcony, they finally found work with Dina Dalal, who needed two tailors. On the way to her flat, they met Maneck Kolah, who was going to be her border, and they all three immediately became friends. Now employed, they rented a small hut from a slumlord. Unfamiliar with the conditions, they were shown the ropes by Rajaram, who also became a good friend.

Originally from the picturesque mountains, Maneck was sent to college to study refrigeration and air conditioning by his father. After experiencing abuse at the hands of some rowdy students at the college hostel, he told his father that he could not return to the school, so his mother found someone who needed a boarder, and so it was arranged that Maneck would live with Dina Dalal and attend college in the city.

Meanwhile, the political landscape was changing. After winning the election, the Prime Minister was accused, and found guilty of, electoral fraud. To avoid being thrown out of Parliament, she declared a state of emergency and threw her accusers in jail. The press was censored and laws were passed that gave uncontrollable power to the authorities. Compulsory sterilisation was put in place and beautification laws saw slums flattened and beggars taken off the streets.

The tailors began working with Dina Dalal, who was initially a strict employer. They had their tea down at the Vishram Vegetarian Restaurant, where they quickly became regulars. Once Maneck moved in, he also joined the tailors for their tea at the Vishram and the three quickly became good friends. One day before they had left for work, a fleet of buses assembled outside their colony. They were all forced onto the buses and taken to a big meeting where the Prime Minister was speaking. While Dina was angry that they hadn't shown up for work that day, she was glad they got back safely after the meeting.

After finishing up another day at work, the tailors returned home to find their colony being demolished--under the laws of the Emergency order, slums such as theirs were illegal. They gathered what belongings they could and slept on the railway station for the night. The next day, they made an arrangement with the nightwatchman at an all-night chemist to sleep in the doorway, leaving their trunk with their belongings at Dina's house. However, while they were sleeping, policemen and trucks raided the street, packed all the beggars, including the tailors, into the truck and drove them to an irrigation project, where they were told they would work for food and board. On the way there, the tailors became friendly with a beggar named Shankar, who had lived on the street his whole life. While at the project, the tailors had a hard time adjusting to the nature of the work and would often fall ill and injure themselves. Shankar, with no legs, was unable to work in the fields so would wait on the patients, particularly the tailors. Their rescue came in the form of Beggarmaster, Shankar's boss, who bought the crippled and injured back from the project manager, and as a favour to Shankar, and also for a price, the manager also bought back the tailors,. He returned them to Dina's flat, where he would pick up his monthly fee for having saved them.

While the tailors were gone, Dina had been at a loss as to what to do, so Maneck had helped her finish the last order that they had started. When they returned, she was so determined she would not lose them again that she offered to allow them to stay on her veranda. As the weeks passed, they developed a comfortable routine and even ate their daily meals together; it was almost as if they were a family. That is until one night when there was a knock on the door, and Ibrahim, the rent collector, gave them a final notice because Dina was not supposed to be running a business out of her home. Dina ignored this notice, and a few weeks later, Ibrahim again knocked on the door, this time with two goondas, who destroyed most of her belongings in the flat. They had forty-eight hours to vacate. They told this story to Beggarmaster, who came to collect his fee the next day, and who assured them that as long as he was paying them, there would no trouble from the landlord.

By this time, Ishvar was beginning to think about finding a wife for Om, and Maneck's final exams were approaching. After making some inquiries, Ishvar discovered that there were four potential families and organised a trip back to his village for the wedding. Dina agreed to let Om's new wife sleep on the veranda also. A few days after the tailors had left, Beggarmaster arrived with the bad news that Shankar, who he had recently discovered was his brother, had been killed. Dina and Maneck went to the funeral in place of the tailors. A few days later, Maneck returned home to the mountains for the holidays, and Dina was again alone in the flat.

Back in Ishvar's village, they reunited with Ashraf, their teacher and were saddened to hear that his wife had died. While they were shopping in the market place, they came across Thakur Dharamsi, who was responsible for the death of their family, and unable to contain himself, Om spat at him. Later that day, while shopping, garbage trucks and policemen swarmed the square, taking people at random. In the scuffle, a policeman hit Ashraf in the head and left him to die while the policeman forced Ishvar and Om onto the trucks. They were taken to a sterilisation camp just outside the city, and were forced to have the operation. While resting in the recovery tent, the Thakur came around to inspect the premises, and seeing Om, ordered that he be castrated. The doctors had no choice but to oblige.

It took a few weeks for Om to recover from this, but once he did, his uncle began to get ill, his legs swelling up and turning black. Sick with blood poisoning, his legs had to be amputated, and he, like Shankar had to learn to get around on a rolling platform made for him by Ashraf's relatives. The tailors decided to return to the city.

Meanwhile, Dina had received a letter from Maneck saying that he had been offered a job in the Gulf and would not be returning to the city. When the tailors did not return, she was forced return the sewing machines. One day a badly injured man knocked on her door and asked for the tailors because he was a previous acquaintance of theirs. When she said that they were not there, he asked if she knew Beggarmaster, and she told the injured man when was the day and time that she next expected a visit from him. When Beggarmaster did not show up, she became suspicious and received a visit from Ibrahim, who was no longer working for the landlord. Ibrahim told her that the injured man had murdered Beggarmaster and that Dina was no longer safe from the landlord. Ibrahim advised Dina to seek legal help. She went to the courthouse to arrange this, but eventually was forced from her apartment by the same goondas, who moved her furniture onto the street. Dina had no choice but to go back and live with her brother.

Eight years later, Maneck returned from the Gulf for his father's funeral, arriving in the middle of riots where Sikh's were being slaughtered. The riots had been provoked by the murder of the Prime Minister by her Sikh guards. After cremating his father, Maneck became very depressed about what had been happening in his country since he had left. He returned to the city to visit Dina and the tailors, and after tracking her down at her brother's place, learned what had happened since he had left. As he left Dina's brother's house, he passed the tailors, now beggars, in the street, but could not bring himself to talk to them. It all became too much for him, and he ended his life by jumping in front of a train. Meanwhile, the tailors made their regular visit to Dina's kitchen, and she fed them, hurrying them along because her sister-in-law would be home early.