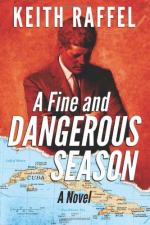 A Fine and Dangerous Season Summary & Study Guide includes comprehensive information and analysis to help you understand the book. This study guide contains the following sections:

This detailed literature summary also contains Quotes and a Free Quiz on A Fine and Dangerous Season by Keith Raffel.

Nathan Michaels, nicknamed Nate, gets a call from the Attorney General of the United States, Robert Kennedy, requesting that he come to the White House. When Nate learns that the request came from the president, he tries to refuse. Nate and Jack were once friends at Stanford, but they had a falling out. Robert Kennedy will not allow Nate to refuse. Nate travels to the White House and learns from Jack that there are nuclear weapons on the beaches of Cuba aimed at the United States. Jack’s security council has had a meeting with Maxim Volkov, the head of the KGB in the United States, and Volkov has requested to see Nate. Volkov and Nate’s father were once close friends.

Nate reluctantly agrees to meet with Volkov. During the meeting, Volkov tells Nate little but makes it clear he has Khrushchev’s ear. Jack is grateful for this information and asks Nate to remain at the White House a little longer so that he can observe several meetings about the crisis and give him an honest opinion. Nate agrees. The following morning, Nate receives a phone call asking him to meet Volkov immediately. When Nate leaves to do so, he is shot at on the street. A mysterious man saves Nate’s life, but he has to go to the hospital to have his ear sewn up.

As the Cuban Missile Crisis continues to develop, Nate recalls his past relationship with Jack. When Nate was in law school at Stanford, he met Jack Kennedy while on a date with his girl, Miriam. Jack sat and talked to Miriam for a few minutes. Later, Jack and Nate began hanging out with each other. Miriam warned Nate that Jack was bad news, but he continued to spend time with him. Nate even took Jack home to have dinner with his family one Sunday afternoon. This is when Jack met Volkov the first time. Not long after, Jack took Nate to Los Angeles where he met Robert Stack, Carole Lombard, and Clark Gable. A few weeks later, Nate caught Jack in bed with Miriam.

Jack asks Nate to meet with Volkov again. Nate sets up the meeting, but Volkov is late. As Nate is preparing to leave, someone begins shooting at him. One of two secret service agents with Nate is killed. Nate manages to run. Volkov picks him up in a car. Volkov tells Nate that he did not arrange the meeting the day before and had no idea who was shooting at Nate. Volkov also tells Nate that he needs to tell the president to be careful because there are people in Washington working against peace between their two countries.

The situation becomes even more dangerous when the Cubans shoot down an American plane flying over their country. Jack announces that if the Cubans shoot down another plane, the United States will retaliate. That night, Nate watches a movie with Jack. The next morning, Nate arranges to see Volkov before the American planes are scheduled for their flyover of Cuba. Volkov tells Nate that Khrushchev is not in control of what the Cubans do. Volkov then contacts the head of the KGB in Russia and tells him that the Americans are willing to remove missiles from Turkey and will not claim victory if the crisis ends. Volkov receives a message saying that the Russians agree to this condition and will take their nuclear missiles from Cuba.

Volkov is shot and killed by the GRU. Volkov’s assistant, Miss Leontieva, helps Nate escape the safe house where they were meeting. Nate and Miss Leontieva rush to find Jack at the church where he is attending services. They are followed by the GRU and a taxi driver is killed. When they arrive at the church, the police threaten to arrest Nate, but the secret service comes to his rescue. Nate tells Jack what he has learned and Jack stops the plane fly over.

After the crisis has ended, Nate returns home to his wife and twin sons. It is in the final sentence of the novel that the reader learns that Nate married Miriam despite her affair with Jack.