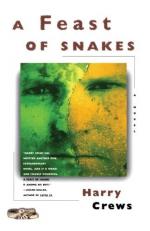 A Feast of Snakes Summary & Study Guide includes comprehensive information and analysis to help you understand the book. This study guide contains the following sections:

This detailed literature summary also contains Topics for Discussion on A Feast of Snakes by Harry Crews.

"A Feast of Snakes" by Harry Crews is a story about Joe Lon Mackey, a young man who is watching his life slip past his fingers. As a high school football player, Joe Lon excelled at everything he touched. However, upon graduation, it was revealed that he could not read. His girlfriend, Berenice Sweet, goes off to college, and Joe Lon is left to run his father's liquor store. He gets married, has two children, and watches as his wife begins to age and become unattractive. He feels helpless and powerless. When Berenice comes back to town for the snake roundup, Joe Lon hopes to rekindle his old love. However, she brings with her a new love, and Joe Lon is forced to take a back seat. He, along with Willard, the local high school football hero, Candy, Berenice's younger sister, Duffy Deeter, a lawyer from Florida, and his girlfriend, Susan Gender, all meet together and begin a trek to outdo one another in terms of the violence they can cause. They attack an older man, Poncy, and humiliate him until he defecates himself. Meanwhile, Lottie May, a young black girl, is taken by the sheriff, Buddy Matlow, and raped. She goes to Joe Lon's sister, Beeder, to ask for help, and insane Beeder tells her to kill that which bothers her. Lottie May begins to see snakes everywhere, and attacks Matlow, thinking his penis is a snake. She castrates and kills him. As Joe Lon is forced to face the loss of his ex-girlfriend, his failing life, and a consistent string of events that lead him to face the failure of all social structures, Joe Lon begins to lose his mind. As the violence surrounding the snake hunt increases, so does the anger and loneliness inside Joe Lon. Joe Lon's father is an alcoholic who raises and abuses fighting dogs. One night, at a match, Joe Lon goes insane after hearing of the death of Matlow, being confronted by his wife about his affair with Berenice, and after hearing a local preacher begin to speak about snakes as signs of Satan. He is taken away, but soon recovers. Unable to face his life, Joe Lon begins to unravel even further. At the snake hunt the following day, Joe Lon shoots the preacher as he preaches, shoots Berenice, a representative of the law, and an innocent hunter. He is forced into the snake pit and is killed. As he dies, he sees his sister and Lottie May, watching him.

The story is a tale of the disastrous results within a person whose whole social structures have failed. For Joe Lon, the church, the family, his wife, his school, his coach, and his friends have all failed to teach him morality, dignity, or anything positive. In the end, Joe Lon chooses death over his life, but finally feels in control again.