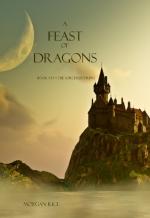 A Feast of Dragons Summary & Study Guide includes comprehensive information and analysis to help you understand the book. This study guide contains the following sections:

This detailed literature summary also contains Quotes and a Free Quiz on A Feast of Dragons by Morgan Rice.

The book A Feast of Dragons by Morgan Rice is the third book in the Sorcerer’s Ring series. It covers the period of time from the beginning of King McCloud’s attack on villages in the MacGil territory up to Gareth’s threat to Gwen that he has sold her in an arranged marriage. Themes in the book include loyalty, and the discovery and fulfillment of one’s prophesy. The book sets sibling against sibling as Gwen tries to confront her brother, Gareth, whom she believes has killed their father.

Several plots wind together in this story keeping interest and excitement high. Thor and his friends are completing their hundred day training, an experience that pits them against nature, strange animals and even a dragon. During this time, another recruit named Malic tries to kill Thor but fails and sets him up as a murderer instead. Thor’s name is cleared when both boys fight Cyclops. Cyclops is a mythical figure who kills the guilty but lets the innocent live. In this story, Thor comes out alive while Malic is killed.

Meanwhile, Gwen and her brother Godfrey are working to prove that their brother, Gareth killed their father, the king. Their half-brother, Kendrick has been framed for the murder and is slated to be killed. Gwen and Godfrey find the murder weapon along with a witness willing to testify against Gareth but Gareth gets wind of Gwen’s plan and has her witness killed. He also threatens to have Gwen sent away to an arranged marriage and tells her that he has set Thor, her boyfriend, up to be killed.

Also in the novel Erec fight for the hand of Alistair, the woman who has caught his eye. He is angered when the man for whom Alistair had been working as an indentured servant sells her as a sex slave. He kills the man who broke his promise to give Alistair to him then goes off to find her and bring her back.

Finally, the MacGil kingdom is threatened as the ruthless King McCloud begins to terrorize villages in the MacGil property. Although Gareth is warned of McCloud’s invasion he shrugs off the threat. In addition to McCloud, Andronicus is trying to find a way to break the protection of the Ring and make both the McCloud and MacGill territories part of his Empire.