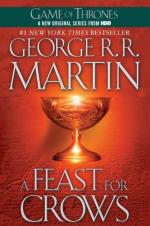 George R. R. Martin
This Study Guide consists of approximately 57 pages of chapter summaries, quotes, character analysis, themes, and more - everything you need to sharpen your knowledge of A Feast for Crows.

A Feast for Crows Summary & Study Guide includes comprehensive information and analysis to help you understand the book. This study guide contains the following sections:

This detailed literature summary also contains Topics for Discussion on A Feast for Crows by George R. R. Martin.

A great war has left the Seven Kingdoms mostly in ruin and in a power vacuum. The last of a great line of kings has been killed and the succession is weak at best. Young King Tommen sits the Iron Throne now, but he is only a child. His mother rules as queen regent, but her lack of leadership skills and her own lust for personal power leaves her son's hold on the throne tenuous at best.

The Iron Born, a rough people who live on the sea, have a new king of their own. The iron men have been launching small raids on the mainland for generations, but with the promise of blood and conquest, their new king, Euron the Crow's Eye, has little trouble convincing his people that the Seven Kingdoms are ripe for the taking.

The brother of one of the late kings, and self-appointed king himself, King Stanis, has launched an attack against King's Guard and young King Tommen to claim Westeros for himself. His conquest of the Wall has led the Night's Watch to be labeled outlaws and traitors, leaving their Lord Commander little choice but to send a letter to the king begging his leniency.

The queen regent's brother and former lover sends a hideous sword maiden on a quest to find the escaped daughters of Eddard Stark. Stark has been deemed a traitor and was executed as such, but his only crime was to attempt to bring light to another, darker treason. Brienne, Swordmaiden of Tarth gathers an unlikely group of comrades on her search for young Sansa Stark, only to find that she is on the wrong trail all along. Meanwhile, Sansa is posing as Alayne, daughter of Lord Pyter Baelish, Lord Protector of the Vale. Baelish, known throughout the realm as Littlefinger, is secretly plotting to marry Sansa to the only remaining Heir of King Jon Arryn, who is also in hiding.

As all of these would be rulers each get closer to the Iron Throne, a question arises. Who will win the Game of Thrones and who will be swept off the board and forgotten in the coming battle?

More summaries and resources for teaching or studying A Feast for Crows.

A Feast for Crows from BookRags. (c)2022 BookRags, Inc. All rights reserved.