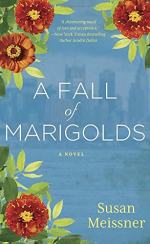 In Chapter 1, Taryn Michaels, a textile restoration expert, writes in first person in past tense. Taryn had a conversation with a customer at the fabric store she worked at, the Heirloom Yard. Taryn wondered briefly at a fabric she came across many years ago but only got to see for one morning. It haunted her ever since. Taryn went to pick up her nine-year-old daughter, Kendal, from her school. Kendal hinted that her mother was overprotective, and Taryn said that bad things can happen in daylight. She noted how Kendal reminded her of her late husband.

When the two reunite with Celine, Taryn's best friend and the Heirloom Yard shop owner, Taryn was shown a picture of herself and a man, Mick Demetrou the florist, on the morning of the September 11, 2001, terrorist attacks on the World...

A Fall of Marigolds from BookRags. (c)2023 BookRags, Inc. All rights reserved.