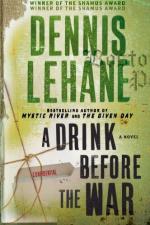 A Drink Before the War Symbols & Objects

The first piece of information Jenna provides to Patrick is a photograph of Brian Paulson, probably before he was elected to the Senate, and a black man Patrick later identifies as Socia. Paulson is wearing boxer shorts and is apparently in a hotel.

Senator Mulken hires Patrick and Angie to find documents that he claims Jenna stole from Senator Paulson's office. These “documents” turn out to be photographs of Senator Paulson raping Roland while Roland's father, Marion, looks on, sometimes forcing Roland into a different position.

This is the gang Curtis Moore belongs to and that is run by Marion Socia.

This is the gang run by Roland that's a direct threat to the Raven Saints.

Patrick refers to his father as “the Hero” because of a story that ran about him saving...