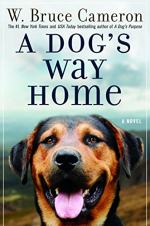 W. Bruce Cameron
This Study Guide consists of approximately 39 pages of chapter summaries, quotes, character analysis, themes, and more - everything you need to sharpen your knowledge of A Dog's Way Home.

This detailed literature summary also contains Quotes and a Free Quiz on A Dog's Way Home by W. Bruce Cameron.

A Dog’s Way Home is a contemporary novel of dogs by W. Bruce Cameron which follows a dog named Bella in her quest to journey hundreds of miles to get home to her owner, Lucas. When the novel begins, Bella is a mixed-breed dog mistaken for a pit bull living with her mother and siblings in the crawlspace of an abandoned building along with a cat colony. Developers wish to raze the building, but they want to get rid of the cats, first. However, Lucas, who works at the VA hospital and is studying medicine in school, does not want harm to come to the cats. He and his vet friend, Audrey, try to save as many of the animals as they can. Lucas and Bella take an instant liking to each other, so Lucas decides to keep Bella and raise her. Bella comes to love Lucas and his Mom, and even goes with Lucas to the VA hospital to help with the veterans.

However, not all the cats are rounded up or saved. Lucas tries to oppose the developers from proceeding until the cats are secured, but Gunter, who is overseeing demolition, refuses to stop. He and Lucas have words, with Gunter threatening to go to war if Lucas does not back off. When Lucas refuses, Gunter reports Bella to animal control as being a pit bull. The responding animal control agent, Chuck, has been paid off by Gunter to report Bella as a pit bull, and to confiscate her, as pit bulls are an illegal breed. Bella is taken away, but the help of Lucas’s girlfriend, Olivia, and the help of his high school buddy, Wayne, smuggle Bella out of the pound. Bella is sent to live with a foster family while Lucas and Mom find a new place to live where pit bulls are not banned.

Bella, however, only has the desire to get back to Lucas. At the first chance she gets, she takes off. She has a journey of hundreds of miles ahead of her, but she is loyal, optimistic, and determined to get home to Lucas. In a journey that comes to span several years, Bella meets, protects, and befriends a baby cougar, who in turn later protects and cares for Bella. Bella meets countless people, most of whom are friendly toward her and feed her. She meets a fellow dog named Dutch, and helps Dutch to rescue his owner from an avalanche even though Dutch’s owner is not a good person, and ends up choosing not to keep Dutch. Dutch finds a new home that makes him happy, while Bella continues on in her journey. She must face down coyotes, protect her temporary owners such as Sylvia from her drug-addict boyfriend, and must deal with tragedy such as the death of homeless veteran Axel.

Bella does not give up. Each step of the way, she renews her determination to get back to Lucas. She discovers that Lucas and Mom have moved out of their apartment when she returns to town, so she then heads to the VA hospital when the same animal control agent who first impounded her seeks to do so again. The veterans of the hospital defend Bella with Mom, and the head of the VA hospital explains county laws about pit bulls do not apply on federal property like the VA hospital. The Sheriff, tired of the animal control agent’s antics, places him on leave and orders the police to leave Bella alone. Bella is then taken home to Lucas, where she and Lucas are overjoyed to see one another. As the novel comes to an end, Bella feels at home with Lucas and Olivia and they could not be happier.

More summaries and resources for teaching or studying A Dog's Way Home.