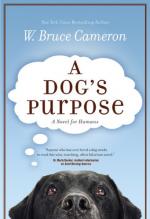 W. Bruce Cameron
This Study Guide consists of approximately 44 pages of chapter summaries, quotes, character analysis, themes, and more - everything you need to sharpen your knowledge of A Dog's Purpose.

This detailed literature summary also contains Topics for Discussion and a Free Quiz on A Dog's Purpose by W. Bruce Cameron.

Four puppies are born to a feral dog who keeps them hidden in a den scooped out underneath the black roots of a tree . The mother dog trains them to fear humans but they are all caught and put in a large fenced-in yard with many other dogs. A kind woman with long, white hair names the hero, Toby. He finally has to be put down because he is wounded in a fight.

In the second reincarnation, the hero is a Golden Retriever named Bailey. He loves Ethan, the boy he lives with, deeply. In the summer Ethan visits his grandparents in the country.There is a girl named Hannah who lives down the road and Ethan falls in love with her .

There is a bad boy in the neighborhood named Todd whom Bailey discovers setting fire to Ethan's house. When Ethan goes away to college, Hannah promises to write every day but Ethan discovers she has a new boyfriend when he returns on a visit. Bailey gets sick and has to be put down.

In the third reincarnation, the puppy is a female German Shepherd named Ellie who becomes a search and rescue dog. When she knows she's near death, she doesn't believe that she'll come back again because she's done everything a dog can do.

In the last reincarnation, the puppy is a Black Lab and he meets his beloved Ethan again as an old man. He reunites Ethan and Hannah who hadn't married one another. He realizes that he has fulfilled his purpose.

The main character remembers people and events from lifetime to lifetime.

More summaries and resources for teaching or studying A Dog's Purpose.