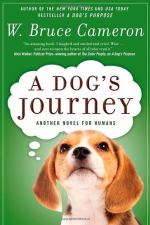 W. Bruce Cameron
This Study Guide consists of approximately 59 pages of chapter summaries, quotes, character analysis, themes, and more - everything you need to sharpen your knowledge of A Dog's Journey.

This detailed literature summary also contains Quotes and a Free Quiz on A Dog's Journey by W. Bruce Cameron.

The following version of this book was used to create this study guide: Cameron, W Bruce. A Dog's Journey. Pan Books, 2013. Kindle Edition.

Buddy feels as if he has served his purpose by taking care of his deceased master, Ethan when he was alive, and Hannah and Ethan’s other family members who live on the Farm. However, when Hannah’s granddaughter, a toddler named Clarity Jones (CJ) comes to visit the Farm with her mother, Gloria, Buddy cannot help but feel that Ethan would want him to help her because her curiosity leads her to dangerous situations and Gloria does not pay attention to her. As a result, Buddy saves CJ from drowning and being trampled by a horse. Instead of admitting that she has been negligent and praising Buddy for his actions, Gloria blames him for each of CJ’s predicaments and gets mad when CJ shows him affection. She later leaves the Farm with CJ after becoming angry when Hannah suggests that she take care of CJ so that Gloria can continue her singing career. Gloria wants the child support payments she receives from Hannah’s son, Henry. After some time, Buddy dies, thinking that he will not be reborn and that he hopes there will be a dog for CJ because she needs one.

Buddy is reborn, however. His realizes that he is now a female dog and his name is Molly. He tries to understand why he is back and then, one day, he sees Clarity who people now call CJ. She comes with her high school friend, Trent. Trent adopts Molly’s brother, Rocky. Molly shows her love for CJ, but CJ says that Gloria will not allow her to have a dog. Not long afterwards, however, she returns and takes Molly home with her, planning to hide her from Gloria. The plan does not work, however, as Molly also tries to show Gloria love and reveals herself. Gloria tires to force CJ to get rid of Molly. Molly fights back by threatening to reveal Gloria’s constant neglect of her. Gloria then tries to eliminate Molly herself by trying to kill the dog and then taking it to an Animal Control shelter. CJ rescues Molly both times. She tries to get her away from Gloria by living with other people and then running away to California. As she is still a minor, she has to return home both times. During the fight for Molly, CJ gets in trouble for skipping school and giving Shane, a boy she dates, the key to the art department. He says he wants to get a copy of an upcoming test, but instead commits a more serious crime. CJ tries to get away from Shane, who continues to try to control her, with Gloria’s blessings. CJ runs away from Gloria again when she discovers that she has spent the money in CJ’s trust fund. CJ was depending on the money to pay for her college education. When she leaves, Shane follows her and she has a car accident. Molly does not survive. As she dies, Molly realizes that she is the dog that was sent to take care of CJ.

Buddy comes back to life again as a small dog named Max. This time he is intent on saving CJ. His devotion to her almost causes his death as he is not nice to other people, so no one wants to adopt him. Finally, he sees CJ who is now a young woman living in New York. She agrees to take him even though she is dog sitting and living in an apartment that is not hers. As it turns out, Trent also now lives in New York and he and CJ reunite. CJ is dating a married man. Trent has a girlfriend. Max recognizes Trent and is nice to him. During this period of her life, things do not go well for CJ and she realizes that she has become her mother. The realization causes her to attempt suicide. Afterwards, Gloria tries to take her back to her house, but Trent intervenes. Upon leaving the hospital, CJ moves in with Trent. He has broken up with his girlfriend and he helps CJ by finding Hannah and arranging a trip to visit the Farm and nursing CJ back to health. CJ finally admits that she loves him in a romantic sense and the two get married. Thanks to Max, Trent is saved from dying of cancer. However, the suicide attempt ruined CJ’s kidneys and she has to go on dialysis. She also goes to school and studies psychology. After a long life with them, Max dies, happy to think that they will be okay.

Buddy is born one more time. This time he has the same name he had at the very beginning of his life, Toby, and he not so anxious to find CJ as he thinks that she will find him when she needs him. His job is to work at a hospice where he comforts dying patients. CJ finally does come. Gloria is suffering from Alzheimer’s and is in the hospice. Both CJ and Gloria are much older. Trent has died, but he and CJ lived a happy life. Gloria dies in the hospice with CJ and Toby by her side. CJ comes to work part time in the hospice. Then, one day, she checks herself in after deciding to end her dialysis treatment. She takes comfort in Toby’s presence, telling him that he reminds her of her dogs Molly and Max. After she dies, Toby continues to serve his purpose which is to help many people. When he dies, he does not come back. Instead he is greeted by all of his old masters and goes to be with them.

More summaries and resources for teaching or studying A Dog's Journey.