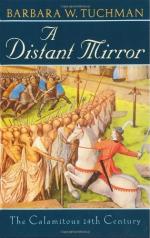 Located at the center of Picardy and acknowledged as one of the "keys of the kingdom" of the region of France. It is a well-populated area and is an example of the constant struggle between earthly wealth and the spiritual.

The Castle of Coucy

A castle of "audacious" proportions that features a rainwater fish pond on the roof, underground tunnels so that provisions can be brought inside in the event of a siege, some two acres inside the wall, thick stone walls to stave off attack and space for more than a thousand men-at-arms to assemble. It is built in only seven years—a major feat considering that cathedrals often take more than a hundred years.

The peasantry of the 14th century. They are named this because the peasants wear a padded surplice, called a "Jacque," in the place of armor during a battle.