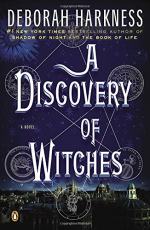 A Discovery of Witches Summary & Study Guide includes comprehensive information and analysis to help you understand the book. This study guide contains the following sections:

This detailed literature summary also contains Quotes and a Free Quiz on A Discovery of Witches by Deborah Harkness.

The following version of the book was used to create this study guide: Harkness, Deborah. A Discovery of Witches (Book One of the All Souls Trilogy) Penguin Group, New York, New York, 2011. Kindle AZW file.

Diana Bishop, who holds a doctorate degree in history, is researching the history of alchemy at the Oxford Library when she first sees a book referred to as Ashmole 782. Elias Ashmole once owned the book. The book is locked by a spell that Diana easily breaks, though she does not know how she accomplishes this feat. She also does not realize that creatures have been searching for the book for centuries. Matthew Clairmont is a vampire who oversees a DNA research program at Oxford, and he immediately knows that Diana is in danger because of her ability to open the book. Matthew becomes Diana's protector, though she does not immediately welcome his presence or interference.

Diana's personal history is unique. She is a witch and a direct descendant of Bridget Bishop, the first woman executed during the Salem Witch Trials. Diana's parents were killed when she was seven, and she has has spent her life refusing to use magic or witchcraft except on minor occasions such as when the washing machine overflows or a book is out of her reach. She believes that it caused her parents' deaths.

Matthew immediately recognizes Diana's magical power when she is able to open the book, Ashmole 782. When Diana sees that the Oxford library is overflowing with creatures, including daemons, witches, and vampires, and she begins to welcome Matthew's presence. She soon begins to fall in love with him, though she struggles to accept his protection. Diana and Matthew believe the other creatures are all interested in the manuscript, though they are not certain of its contents. However, a direct threat against Diana makes it clear that she is not safe and Matthew convinces her to go to France with him, to his family home.

There, Diana forms an uneasy alliance with Matthew's vampire mother, Ysabeau, and the housekeeper, Marthe. When a vampire arrives at the estate and makes another threat, Diana learns that the group’s governing creatures have forbidden inter-creature relationships, It seems that Diana and Matthew are being targeted because they are in love. Ysabeau has accepted that Matthew has claimed Diana as his own, and she is fierce when a witch kidnaps Diana.

Once Diana escapes with the help of Matthew and his brother, she realizes that her refusal to learn witchcraft has put her in danger. She and Matthew go to the home in New York where Diana grew up. There, her Aunt Sarah and Sarah's partner Emily reluctantly accept the relationship and agree to help Diana work on her magic. By this time, it is clear that Diana's magic exceeds any power any of them have seen, though she cannot harness it. They discover a letter, written to Diana by her mother, Rebecca. The letter reveals that witches had learned of Diana's power, but Diana's parents convinced the witches that the power they sensed was really coming from Diana's father, Stephen. Rebecca and Stephen had died to keep Diana's power hidden.

The situation escalates as Matthew reveals that there are fewer creatures in the world with each passing year and that their groups could be in danger of dying out altogether.

Sophie and Nathaniel Wilson join the group. Sophie is a daemon, but she is also the daughter of witches. Sophie and Nathaniel's unborn child is a witch. Others join, including Matthew's vampire son Marcus, a vampire scientist named Miriam, and a daemon business person named Hamish. Together, they plan to face down whatever threats come their way. However, they know they need to provide Diana with time and guidance to learn how to use her power. Diana learns that her many powers include time walking – traveling into the past or future. Matthew turns over his many responsibilities to the others as he and Diana travel back in time to the 1500s.