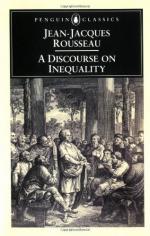 A Discourse on Inequality Summary & Study Guide includes comprehensive information and analysis to help you understand the book. This study guide contains the following sections:

This detailed literature summary also contains Topics for Discussion and a Free Quiz on A Discourse on Inequality by Jean-Jacques Rousseau.

Jean-Jacques Rousseau (1712-1778) is one of history's great political philosophers of education. He was a well-known essayist and composer, represented a major strain of Enlightenment thought and went on to influence the French revolution after his death. His two most important philosophical works are The Social Contract, which sets out his political theory, and Emile, which sets out his philosophy of education. He initiated the modern autobiography with his own Confessions and wrote a pre-Romantic novel, known as Julie, which prefigured French romantic novel writing.

The first Discourse, hereafter the Discourse on the Arts and Sciences, argues that the development of arts and sciences help to corrupt human morality. The Discourse became Rousseau's first popular success. It had been written, Rousseau notes, in response to an advertisement for an essay contest asking whether the Sciences and Arts contribute to the improvement or corruption of morals. Rousseau here begins his lifelong focus on how civilization corrupts humanity, a theme running throughout the Discourses.

In the original state of nature, savage man is not much affected by these differences. However, as civilization develops, natural inequalities begin to produce moral and political inequality that come first in the form of wealth. Since the rich stand much to gain from the attacks of the poor, they invent political power to protect themselves. Ultimately, however, political power turns against them and enslaves all, generating despotism.

The third Discourse, hereafter the Discourse on Political Economy, prefigures Rousseau's work in the Social Contract. The question arises of how political order should be structured in modern civil society. The problem in modern orders is the extreme oppression of the poor by the rich and the state. The poor would be better off with their savage, primitive state of equality. How can modern political order be justified to them? Ultimately, the only just laws are those that are derived from the "general will" or the will of all persons as a whole, directed to the good of the whole. And only government according to the general will on behalf of the common good can be justified to all.